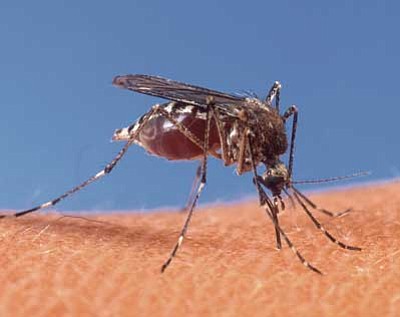 File photo<br> Mosquitos, like the one pictured above, typically thrive in monsoon conditions. This year, the Flood Water mosquito has made its presence known throughout the greater Williams area.

WILLIAMS - Buzzing mosquitoes is one of the familiar sounds of summer we could all do without. But this year, that sound has been louder than normal.

"There are more than usual over there," he said. "I was bit yesterday doing a pool inspection up at a local motel. There are different types of mosquitoes. Right now, we're getting what we call a Flood Water mosquitoes."

According to Murray, the Flood Water mosquito, or Aedes vexans, typically shows up during monsoon conditions. The mosquitoes take advantage of shallow areas of water, lasting for as little as two or three weeks before evaporating, in order to lay their eggs. By the time the water is gone, the adult mosquitoes are off into the air possibly even laying eggs again.

"The lifecycles are faster for these types of mosquitoes than they are for normal types so they come off faster," Murray said. "They lay their eggs along the sides of ponds and depressions and when they dry up, the eggs will encapsulate and withstand defecation. That way when the waters come again the next year during monsoon season they hatch and come out. So, it's hard to control them."

What differentiates the Flood Water mosquito from other varieties is its predilection to bite during the day with more of a sting and a bigger welt. On the positive side, the mosquito is not a West Nile Virus carrier.

"I killed a couple yesterday and they definitely aren't the type to carry West Nile Virus," Murray said.

There are four CCHD mosquito test sites in the Williams area. There have been no instances of West Nile Virus found this year anywhere in Coconino County. Murray said over the last four years the virus has not been found in and around Williams although there have been a few positive results in the Flagstaff area.

Culex tarsalis, better know as the Western Encephalitis mosquito, is the main carrier of West Nile Virus found in northern Arizona. While Coconino County has been relatively free of the virus, Maricopa County hasn't been so lucky.

"Maricopa County has had a lot of West Nile Virus this year for them," Murray said.

According to information on the CCHD Website, West Nile virus was first detected in the U.S. in 1999 in New York. It spread rapidly throughout the U.S. infecting animals and humans in 48 states by 2003. The virus is picked up from infected birds by mosquitoes and then transmitted to humans and animals. Approximately 80 percent of humans infected by West Nile virus experience no symptoms although the virus can cause fever, headache and joint and muscle pain.

CCHD officials encourage residents to remove standing water from near their homes to control the mosquito population.

For more information or to report any concerns, contact the Coconino County Health Department at (928) 679-8750.