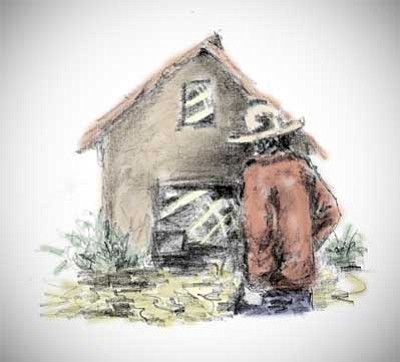 Usually when I opened the post office box, there was just the regular stuff, y'know: circulars personally addressed to "resident," unbelievable offers of all kinds, the occasional bill forgotten in a previous life. Nobody writes real letters anymore. I had an e-mail address that I checked when I could get to the library, but didn't keep in touch with too many people anyway. Mom sends e-mails pretty regular, every week or two. I answer now and again; I even call her when I've got time and change and can find a working pay phone.

She and Dad got married real young, kids in small towns often did. He'd grown up on the Whitman Ranch where Grandpa was foreman. After they got married, he and Mom rented a little place in Mobly - about 25 miles from the ranch. They both got jobs and started saving for their big dreams. Dad soon saw he'd never get away on what the lumberyard paid, so he joined the army for the regular salary and the chance to live anywhere else.

They did all right after basic, moved to an army base in California, had lots of friends - plenty to keep 'em entertained. I was only about 6 when he got sent to Vietnam, me and Mom moved back to Mobly to wait out that 13 months.

Dad sent most of his money home, so Mom didn't have to work much; still she liked to spend a few hours waitressing and being with folks her age

Some years before, Mr. Whitman gave Grandma and Grandpa the deed to a house and an acre. Maybe it was a way of keeping him there, maybe a way to justify paying him less than he ought. He and Grandma were content, though, they had an irrigated garden, plenty of meat from the ranch, and the security of a place to live when they retired. Of course for Grandpa, retirement would mean doing the same thing he had always done, just maybe slower. He worked the cycle of the weather and the ranch, saddling up his horse, Copper, most every day, rain or shine.

One day a car pulled up to the curb in front of our house. Two guys in dress greens got out, squared their hats, came up the walk, and knocked on the door. Mom, too, had seen them drive up and started crying before she even opened the door.

She didn't send me back to school that fall, told folks she'd home-school me. Truth was she spent most of her time just hiding from her grief; people say she got a little crazy back then. Grandpa did what he could to watch after his only son's young wife, but there were limits; besides he had a hole in his own heart to fill. Grandma and Grandpa began to pick me up, now and again, for sleepovers at the ranch; wasn't long before I just lived there full-time. Grandma got me fed, dressed and ready for the school bus each morning; none of that home-school baloney for her.

After school and summers, I was Grandpa's constant shadow. Most days when he was done, he'd boost me up on Copper just before he'd put her up for the night. He'd guide my foot into the stirrup, and held me as I threw my leg over the top. I'd hold tight to that horn with both hands while he adjusted the stirrups as high as they'd go. He'd hold the reins and walk her slowly the 50 or so yards to the barn. Once inside, he'd lift me off the saddle, scoop a little feed into the trough to keep her busy, lift the stirrups over the seat and undo the cinches. He'd then lift the saddle off and carry it over to the rack where the sheepskin underneath could dry. When I got a little older and could handle her alone, putting up Copper and tending the saddle became one of my regular chores.

Most evenings, after dinner, he'd light his pipe and ask me to join him for a walk. Usually that meant head down to check up on things in the barn. We'd talk while straightening up some tools, checking on Copper, taking care of the saddle. We'd untangle rigging, pick off any spots of mud I might have missed, oil up the leather, and polish the metal. It was important to him that his tools, and especially his saddle, were kept in good shape.

Mom eventually recovered, remarried and moved to Seattle; she's got three teen-agers. I hardly ever see them, but we still get along OK. I was too young to really understand what was going on, then. After high school I'd moved to the city to try college, but never finished a whole program in anything. I like being outside, so ended up having a series of jobs in a series of places. Though I never made enough to get ahead, I maintained an illusion of freedom. Grandpa eventually quit riding Copper every day; said the horse just couldn't work like she used to. Mr. Whitman got him one of those four wheelers to drive around in, and told him to hire an extra hand to help with the heavier stuff.

I hadn't checked the post office box in some time, so there was more than the usual amount to sort through. Most was junk and went right into the wastebasket in the post office lobby. I recognized Grandma's familiar handwriting on one envelope immediately, though she hadn't written to me since college. Turns out that Grandpa had been doing poorly of late, Grandma had been trying to care for him at home, but she really wasn't able. He had died quietly one night about two weeks back. Grandma was lonely and preparing to move to a home in town; wondered I'd have time to give her a hand.

Well, I was between jobs... seemed I was always between jobs, so I gathered what I'd need, packed it into the pickup and left the next morning for the ranch.

My guilt over my nine-year absence was evident to Grandma as she opened the door; so was my surprise at how she'd aged. She smiled broadly, hugged me close and forgave me without a word. My room, she told me, was all made up. It was late and she was off to bed.

In the morning, I awakened to the smell of coffee and frying bacon; it seemed I had never left. I got up, washed my face and went downstairs to the kitchen. Grandma smiled warmly and handed me a cup of coffee, but I could see her tears welling up. I put the cup down and hugged her for a long time, trying to apologize for all those years.

After breakfast she put me to work. There were boxes to pack, clothes to sort. She kept up a running, matter of fact, commentary as we worked. I realized that she had accepted the inevitability of Grandpa's death and really, her own, for some time now. She was nearing the end of her life, but ready for a new chapter, I was in the middle of my life, still figuring out what I ought to do.

That night, Grandma cooked one of my old favorite meals and made the house smell like home again. She was pretty worn out and fell fast asleep almost as soon as she sat down in her chair. I cleaned up the kitchen, then wandered out to the barn for a look around. The barn was being used for the four-wheeler and other machines that had replaced the horses. I opened the door to the shed where, years ago, I had set the saddle up for drying each evening, and there it was, sitting on the rack, still soft and clean, right where it had always been. I rested my hand on that saddle's horn and cried quietly for my Grandpa, for my father, for my lonely self.

The door creaked open, startling me. There stood Grandma, tears on her cheeks, too. "I thought I'd find you here," she said. "You know he wanted you to have that old saddle, don't you?"

I stayed up late that night, just thinking... maybe Grandma would rent me this house, maybe the Whitman ranch could use another hand.

(Editor's note: Copper's Saddle is the winning entry in the Old Timer's Saddle Short Story Contest. Writer Dennis Dreher won tickets to this year's Western Auction, to be held Saturday night, and publication of his story in this week's edition of the News. The contest was judged by western author Gary McCarthy and Patrick Whitehurst with the Williams-Grand Canyon News.)