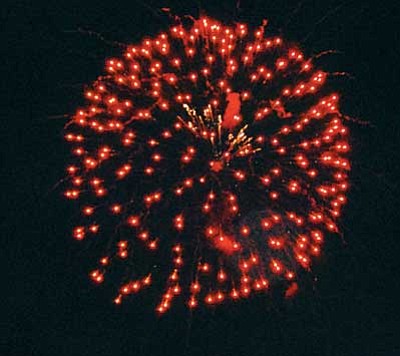 VALLE, Ariz. - Excitement is brewing for this year's Annual Fireworks Display in Valle. Held the same day as the popular Thunder Over the Coconino Event, to be held at the Valle Airport, the fireworks is slated for 7-11 p.m. Saturday. The event is hosted by the Flinstones Campground, near the Highway 64, 180 junction between Williams and the Grand Canyon. According to Kathleen Knight, a volunteer for the Valle-Wood Fire Department, this year's fireworks show will be one to remember.

"I'm currently working on a couple of hotels right now, one in Vegas and one in Laughlin, to maybe get some packages outside to raise more money for the fire department," Knight said. "This fire department is very special in the area, due to the fact that they have helped out several times with my friend's kids being sick. If they weren't there, I don't know what would have went on. They are very important as far as they help save homes, they help take care of their community."

Admission for the event is $5 for those 12-years-old and older. Children are free.

"William Collins Junior throws the best fireworks display I have ever seen in my life. They're awesome and everybody has a great time. Everybody is always talking about them afterwards. This is going to be the biggest and best show he has ever done," Knight said. "He works for the fire department and he has his explosive license to do the fireworks shows. He plans them and coordinates them."

"This is the only way they raise money, that and the booth that sits on our counter at the Travel Stop and some other places where they have donation boxes. We really need the community to come out and support the fire department," Knight said. "The more people we can get out here, the bigger and better it's going to be for everybody."

This year's Thunder Over the Coconino will be held at the Valle Airport Saturday from 8 a.m. to 3 p.m. Officials with the Valle Airport, the local EAA Chapter 856, and the Valle Planes of Fame Museum organized the event. Vendors, food and more will be offered during the air and car show. The event is organized by the Grand Canyon Airport in conjunction with the Planes of Fame Museum located next door. Entry fees for the event will allow visitors to visit the museum as well as the event itself. More information on Thunder Over the Coconino can be found online at www.valleairport.com. The Valle Airport can be contacted at (928) 635-5280. The Valle Airport is located on Highway 64 at the Highway 180 interchange.

Valle Days at Bedrock City this Saturday
Editorial: Get out and about this weekend
Air show in Valle this Saturday
Planes to thunder over Coconino Saturday
Valle Airport to host Labor Day weekend fly-in
Event Calendar