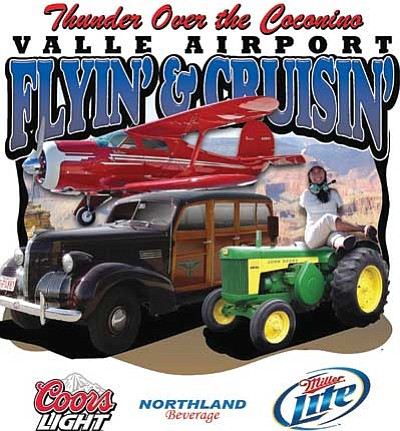 <br>Courtesy Valle Airport<br> Featured speaker Jessica Cox is highlighted on promotional material for the 2010 Thunder Over the Coconino event.

VALLE, Ariz. - Called "one of northern Arizona's premier aviation events," the 2010 Thunder Over the Coconino has become a popular attraction for visitors to the Valle area.

This year's Thunder Over the Coconino will be held at the Valle Airport Aug. 28 from 8 a.m. to 3 p.m. Officials with the Valle Airport, the local EAA Chapter 856, and the Valle Planes of Fame Museum organized the event. Vendors, food and more will be offered during the event.

Norm Gobeil, organizer for the event, said the event is now entering its sixth year.

"During the day we'll have pretty much the planes that did commercial flights over the Grand Canyon," Gobeil said.

"There will be a car show all day, old tractors," Gobeil said. "The coolest thing about it all is there will be a young lady by the name of Jessica Cox who will be here all day. Jessica was born without any arms. Jessica is the only person in the history of aviation to get a pilot's license with no arms. She also has a black belt in Karate and she is just an inspiration. She really is. You complain about your hot water heater or something in the morning and here's a young lady with no arms that just absolutely takes care of herself."

More information on Cox can be found online at www.rightfooted.com.

"It took her six weeks to learn how to put her headset on with only her feet," Gobeil said. "To get in her airplane, and she does this all by herself when she gets in the plane, she moves the canopy back with her feet, she stands in the plane, then she loosens all the seatbelts, the five part harness, the clips them all together, then slides down in and tightens them all with her feet."

Cox, who is scheduled to be at the event all day, is also featured on t-shirts commemorating this year's Thunder Over the Coconino event. Cox will sign shirts during the event, Gobeil said.

"It should be a really fun event," he said.

The event is organized by the Grand Canyon Airport in conjunction with the Planes of Fame Museum located next door. Entry fees for the event will allow visitors to visit the museum as well as the event itself. More information on the event can be found online at www.valleairport.com. Gobeil can be contacted at (928) 635-5280. The Valle Airport is located on Highway 64 at the Highway 180 interchange.