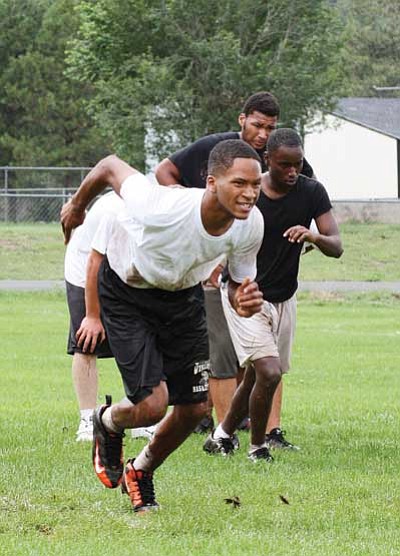 WILLIAMS - Athletes from Williams High School have been eating, breathing and living football this summer.

Vikings Head Coach Jeff Brownlee said the camp was a learning experience for all those involved.

"The football camp was excellent," Brownlee said. "You're talking about one of the best programs in the state and our kids had an opportunity to be involved. They learned a lot and so did the coaches."

Viking Jamal Brown said, while the program was difficult, it prepared him for the upcoming season more than he expected.

"It was pretty hard," he said. "Probably the toughest thing I've ever done. It was definitely worth it. I feel in shape right now and ready to go."

With the camp behind them, the Vikes began two-a-day practices on Monday.

"This is something that every football program does about a week before school starts," Brownlee said. "It gives us an opportunity to have a morning session and an afternoon session."

The Vikings' coaching staff focuses on offense during the morning session with defense the focus in the afternoon. Each session lasts for about two and a half hours.

"We're making sure they're conditioned and we get their muscles going," he said.

Various community groups are providing lunch to Viking players during the week. Yes I Can along with the Williams Alliance provided Monday's meal. Williams Clean and Beautiful, Kiwanis, Rotary. Xanterra and the WHS Booster Club will provide the rest of the week's meals.

Regular practices will begin next week. The Vikes travel to Page for their first scrimmage Aug. 20.

Brownlee said he expects to start the season at full stride with approximately 45 players when the season begins supporting both the varsity and junior varsity programs.

"We're a lot further along this year than we were last year so, we're doing well," he said.