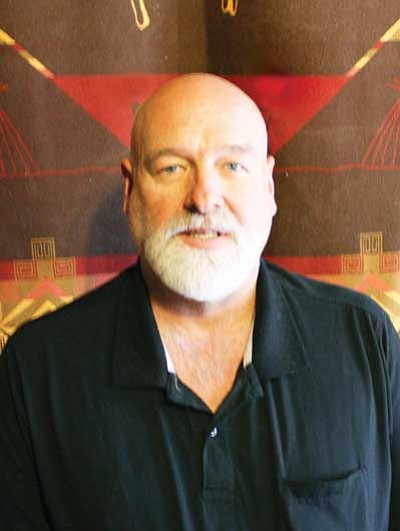 News: What made you decide to run for this office?

Reuter: "I first came to the Canyon in '72. I formally served on the South Grand Canyon Sanitary District and was involved in some politics there, water and wastewater. I think the council really needs somebody who understands infrastructure and the history of infrastructure here and where it can go. I think that's something I can bring to the council. I am a certified water and wastewater operator and former chairman of the South Grand Canyon Sanitary District. I operated different water systems and wastewater in the area. I think infrastructure is going to be the key to Tusayan's future. I believe that's where I can help out a lot."

News: What do you plan to accomplish if elected?

Reuter: "One thing I want to see is I want to see the eventual completion of the reclaimed system and I'd like to see the town assist the sanitary district in having 100 percent compliance in every toilet in Tusayan being on the reclaimed system, all irrigation, so our water conservation is second to none. That's one thing I want to see. Number two is I want to see both the reclaimed and fresh water system, I want to see more fire hydrants and I want to see the line extended to protect Tusayan from wildfires to the east. I want to eventually see the water line having a good circulation system, everything is looped. I think that's important. I want to continue the partnership with the airport. In the last year, with Mike Halpin's help, and ADOT, I entered into a project with them, which involved converting their raw water tanks to finished storage and we've increased the storage capacity in Tusayan by double. There was three million gallons before and now we've added another three millions and that was at very little cost and it's going to benefit the airport and the town of Tusayan as we move forward. Water storage is a very important, expe3nsive item, so the state managed to take a project that hasn't worked so well over the years they've really changed a sow's ear to a silk purse. They're providing more services and it's hardly cost anything and it will be great for Tusayan's future. I want to see that partnership developed. I also want to see that Tusayan does not become too centralized, as far as its government. We have several entities here, as far as the sanitary district and the fire district that have proven to be self-sustaining, naturally and physically. They have their own boards, their own people, and I don't want to see the city swallow them up. I do want to see the city support the fire district and I really want to see the city, perhaps through its revenue stream, give some financial support to help the volunteers and the part time folks to get them competitive salaries and the full time folks have competitive salaries, because we should be paying the same as they do in Flagstaff or Phoenix. Our town should be that good and our people need to get competitive salaries. We should leave the fire district independent, but we should be there to help them with revenue and salaries for the people. Your greatest investment is people. It's not fire hydrants, it's not fire trucks, it's people, I think, in whatever you do."

News: How do you feel about growth, positive, negative?

Reuter: "I'm positive about growth if it's well planned. I think our situation is unique because growth can only happen on private land. We have 140 acres here in Tusayan and there's another 140, 160 acres at the Kotzin property and parts of this, especially here in Tusayan, are limited as far as growth, because we're an approach to the airport and we have some flood plain issues, so there's some natural controls on growth. No one wants to see skyscrapers; no one wants to see golf courses. What we want to see is a beautiful, balanced entryway to the Grand Canyon that will compliment it. We also want to have things that make the people visiting the Grand Canyon want to spend time and, yes, want to spend money in Tusayan, but we want them to be happy about it and we want them to tell other people. We'd like them to stay here more than one day. To make that happen, we're going to have to have some growth. We're going to need to grow as far as the highway out front here in conjunction with the road project. We need to grow into having meandering sidewalks and some landscape, and slowing the cars down lower than 40 miles an hour. I think if we get just a little bit of growth, then I think we can look at getting better airline and aviation connections at a state of the art facility out at the airport. We need to support that airport. We need to be there helping them be a voice, whether it's in Washington D.C. getting funding from the FAA, we're joined at the hip with the airport. The state is in serious financial problems, so we need to support our aviation activities with that airport and it and Tusayan do need to grow some, not that much, but some. The place we need a lot of growth at is in housing. That's the one area we need a lot of growth. So it will take a little commercial growth to give us a lot of housing growth and option for people here."

News: What is the single biggest challenge facing Tusayan?

Reuter: "I think it's getting people to work together and give up old ideas, old concepts. Tusayan has always been kind of a top down town. It needs to be more of a bottom up. I think most employers would like to operate without being responsible for or having to intrude on their employee's personal lives as far as housing. We need more of that and we should be open to anyone, any developer, and we need to go to them. We just can't wait for them to come back to us."

News: Where do you see Tusayan at the end of your term?

Reuter: "It will be kind of what I just talked about. The whole town would be on 100 percent reclaimed, as far as toilets. We continue to be the number one town in the United States as far as recycling water per capita. We would have plenty of fire flow, fire hydrants, plenty of water storage that we need, for whatever growth we've incurred. Anytime that I've seen Tusayan work together, I've seen amazing things happen. When I came here back in '95, the Sanitary District was under a compliance order from ADEQ and it was over capacity, it was broke, and in bad shape. Then the town got together, they want with WIFA for a loan, they bit the bullet, and decided they would pay increased rates. When we did that we were small wastewater district of the year in Arizona. I had the honor to do that during my term with Bob Petzoldt and the other members. When I left I was really happy to see that they brought Ben Gomez on board, some other folks, and they continued it and it wasn't but a couple of years later they got that award again, so there's an example of the town working together, people having different interests, but they did it themselves with people here. I want us to do it here. We're going to have different opinions. I want us to stand on our own two feet. I want us to settle our differences and make our compromises here with our own people. Once we do that I think then we can work better with the entities such as the county and the park and the city of Williams. I think then we can be a strong player with all of them."