Stretching to get the stress out
After a slow start, yoga catching on in Williams 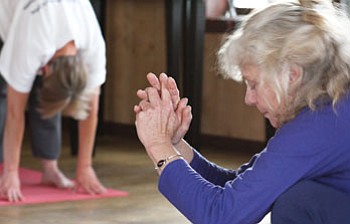 Ryan Williams/WGCN Yoga instructor Ginny Dean says her primary focus is Hatha yoga, what she calls a traditional form of the art.

WILLIAMS - Stress relief. Everybody needs it, but it's often hard to come by.

Williams resident Ginny Dean said practicing yoga is one of the best ways to feel better physically and mentally while at the same time developing more flexibility.

"You do feel better," she said. "It's important to stretch for many reasons. If nothing else, just to get the blood flowing in the body. And stretching and increasing your flexibility ultimately releases stress from the body."

Dean runs the Yoga Studio and currently offers classes upstairs at Hop Sings Restaurant. She has been teaching yoga for close to 23 years. Her primary focus is Hatha yoga, which she said is a very traditional form of yoga.

Originally introduced in the 15th century by Yogi Swatmarama in India, Hatha yoga is a combination of slow-paced stretching and breathing exercises.

"Releasing stress gives you peace of mind," she said. "Sometimes just releasing stress from all parts of the body gives you a different perspective on life and what you're doing in your world, in your life."

Dean said she began offering yoga in Williams about three years ago with limited success. After starting classes several times, her current class has continued to thrive. Dean currently offers classes four times per week on Monday and Thursday evenings and Monday and Wednesday mornings.

"It has taken a bit of time to get people to realize the benefits of it," Dean said. "If people keep coming, they usually feel the benefits. If they stop coming, they wish they were still coming because they know they feel a lot better from coming to classes."

While attending a yoga class for the first time can be intimidating, Dean said no experience is necessary. She advises her new students to do only what feels comfortable and nothing more. Learning yoga is a process like any other form of exercise and Dean is careful to watch her students to make sure no one gets hurt.

"You can't just jump into it having never done it before and expect to be perfectly in tune with it and be able to do the postures perfectly," she said.

Yoga has been a part of Dean's life for close to 40 years. While studying modern dance at the University of Iowa, Dean took her first yoga class. She said doing yoga immediately made sense in her life.

"It just clicked for me," she said. "It was one of the best things I've ever done."

After drifting away from practicing yoga for several years, Dean re-dedicated herself to the practice in her late 20s. She began to study and take classes regularly before deciding to begin teaching others.

"I was living in a community where there were no classes and I thought 'If I teach this at least I will keep doing this and I won't stop,'" she said.

Dean taught for 12 years in Patagonia and Tucson. She said one of the greatest benefits of a consistent yoga practice is physically feeling or developing awareness about one's body, which can then inform other areas of one's life.

"People aren't aware of their bodies," she said. "If you ask people, 'What did you just do a second ago or five minutes ago,' they don't know," she said. "We all do it. I really like the intent of being as aware as you can be about your body. Because what happens over a period of time, and I say this because it has happened to me, the more awareness you develop, the more introspective you can be about your life and the changes you can make."