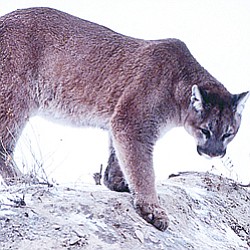 When it comes to the wildlife at the Grand Canyon, the mountain lion has always inspired a sense of wonder when it comes to the creatures who call the South Rim area home. They are called by a number of different names: puma, cougar, cats, and more. They also struggle to live in areas where civilization and nature mix. Mountain lions inhabit wide ranges of territory and will often come near areas where people can also be found, such as the Tusayan and Grand Canyon Village area. But coming near is about as far as they get. The large cats tend to go around any inhabited terrain, preferring less inhabited areas where they can hunt their prey, according to experts within the Grand Canyon National Park. Human encounters, unless killed on a road or hunted, are quite rare.

Considered as the largest predator in the area, mountain lions cover a vast range in northern Arizona. Male cats will cover 124 to 185 square miles of home range, while female mountain lions will cover roughly 76 to 172 square miles of area. Almost always, the cougars that live near the Grand Canyon will head for the South Rim at some point in time, but even then they are rarely seen by human eyes. In the event of an encounter, however, there are a number of simple rules designed to avoid confrontation, according to the Arizona Department of Game and Fish. Stay calm and speak firmly. Never approach the animal. If it has a way to escape, the mountain lion will typically choose to flee. Do not run from a mountain lion. Face the animal, standing, and make eye contact with it. Game and Fish officials also recommend that you make yourself appear larger by slowly lifting your arms, opening a jacket, and throwing items that can be reached without crouching or turning around. If possible, back away toward a vehicle, busy area or building without breaking eye contact. Always protect small children so they do not run from the animal and, if needed, fight back. Many have successfully fought off a mountain lion attack with rocks, sticks and any other items that may be nearby. While these encounters are very rare, it is always a good idea to be prepared.

Friday, wildlife biologist Brandon Holton will provide his insight on these amazing creatures. Holton will speak at the Shrine of Ages beginning at 7:30 p.m. He will also speak in Flagstaff May 5 at Northern Arizona University's Cline Library as part of the Conversations on the Edge lecture series, provided in partnership with the Grand Canyon Association, NAU and the National Park Service. The Flagstaff lecture is scheduled to begin at 7 p.m.