Williams CCC campus hanging on
Will close this summer, reopen in fall 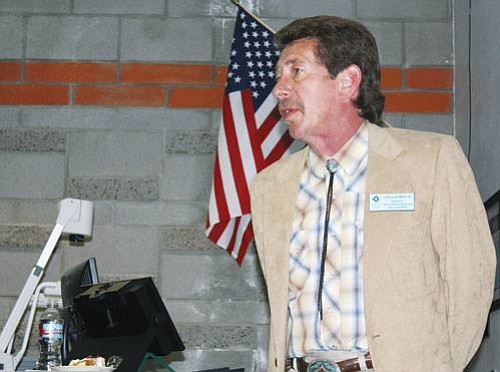 WILLIAMS - Members of the Williams Rotary Club got a special treat April 15 when they paid a visit to the Williams campus of Coconino Community College (CCC), located just south of Williams High School (WHS) on Seventh Street. Students from the high school culinary arts class prepared lunch for the visiting organization. Officials with CCC were also on hand to talk about the state of the Williams Campus. While the campus is slated to close again for the summer, it will reopen in the fall, but whether it remains open is still up in the air, said CCC President and CEO Leah Bornstein.

"We're closing this facility in the summer like last year," Bornstein said. "We're reopening in the fall like last year. We have a great facility. Over the course of 10 years, we have had poor utilization."

Ninety percent of all classes offered throughout the CCC campuses in northern Arizona are not cancelled, according to CCC information. In Williams, however, close to 50 percent of the classes are cancelled due to a lack of enrollment.

Bornstein added that students typically tend to travel to the Flagstaff campus of CCC rather than utilize satellite campuses such as that found in Williams. She said 40 students were registered in the last semester from the Williams, Grand Canyon corridor.

Bornstein said that CCC officials began to look at the state of Arizona's gloomy economic outlook in 2008 and what effects that would have on the community college.

"We're still sitting at Tier II. We're starting to look at some Tier III initiatives," Bornstein said. "We created a three-tier plan. Tier I looked at efficiency, what we can do to make us more efficient to help us save money. Tier II was when we were in a more critical situation, things like reorganizing whole departments, realigning, reducing some services, maybe eliminating some services, things that were more painful. Tier III are things that you never, ever want to do, things such as close campuses, cut viable programs, RIF employees. In Tier II we did eliminate positions through reorganizations."

She said that currently the school is still in a Tier II situation, but she is anticipating further cuts.

"We are anticipating that, probably in 2012, 2013, community colleges in the state will probably receive no state funding," Bornstein said. "We're starting to think about what that means to us."

One possible idea to better utilize the facility includes using the Williams CCC facility for city use, while still using it for classes as well.

Stephen Chambers, executive director of the institutional research department for CCC, shared the results of a recent community survey with Rotarians during the recent meeting. He said that fewer than 100 residents replied to the survey. Officials had hoped for over 1,000 responses, Chambers said.

"With 91 (responses), we couldn't really say that this is the way the Williams, Grand Canyon area really feels about the college," Chambers said. "However it does give us the thoughts and opinions of 91 residents. Certainly that is more information than we had previously, so it did give us some food for thought and we have been mulling over the results ever since."

Results, he said, came from young respondents from all three of the surveyed communities.

While the Grand Canyon, Tusayan and Williams area was surveyed this year, next year the survey will extend to the Page, Fredonia and Tuba City areas. In 2012, the survey will be held in the Flagstaff area. Following that rotation, surveys will start over again beginning with the Williams area, CCC officials said.

"This is a three-year cycle," Chambers said.