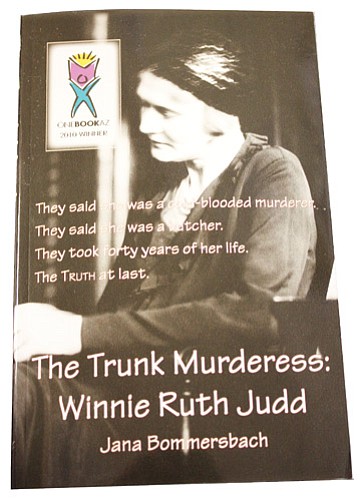 Bommersbach's book was chosen as the One Book Arizona adult title for 2010.

GRAND CANYON, Ariz. - True Crime author and writer Jana Bommersbach will make a special appearance at the Grand Canyon Library this Friday. The event will begin at 1 p.m. and, besides the popular author herself, will also feature refreshments. Copies of her book, The Trunk Murderess: Winnie Ruth Judd, will also be available to purchase at the time of the event, according to Grand Canyon Librarian Mindy Karlsberger.

She said the book was chosen for the adult recipient of the annual One Book Arizona prize. Bommersbach is currently appearing at a number of locations throughout the state, Karlsberger said. She will appear in Flagstaff on Saturday as part of this year's Northern Arizona Book Festival.

"Librarians from around the state got to vote on what the next book would be for the fall," Karlsberger said. "I had read this book, The Trunk Murderess, a few years ago when it was first published, so I voted for that. The idea is there is an adult book and a children's book and everybody in the state is supposed to read that. Then you can sit around and talk about it. In theory it is a really great idea. I've never done too much in the past. A few months ago I was contacted by somebody from One Book Arizona, she said Jana Bommersbach was touring around the state and going to libraries and doing a reading and a book signing. She asked if I wanted her to come here and I said yeah."

Karlsberger added that the library has rarely hosted authors for book signings in the past.

"I've never done any authors readings or signings in this library before, because there's really not a defined place for it, but I thought I would give it a try," Karlsberger said. "She's going to be here and do a reading and sign some books. They sent me some extra copies, so I think we'll go ahead and sell those."

The children's selection for 2010 is The Three Little Javalina's by Susan Lowell, which is also on display at the Grand Canyon Library.

"It's a remake of the Three Little Pigs. It's sweet," Karlsberger said.