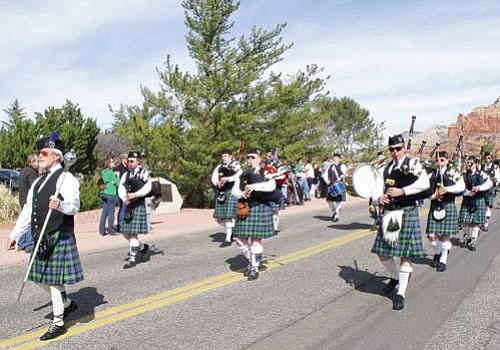 WILLIAMS - Williams is known for a lot of things. Route 66, cowboys, ranchers and trains among them. Now, a group of musicians based in Williams has begun to make Williams synonymous with the sound of bagpipes.

It's not the first time the group has won the award for marching, uniforms, deportment and musicality.

"People don't normally win it two years in a row," Grimes said. "In fact the organizers told us that. Don't plan on winning again this year. But, we did. We were kind of shocked."

Grimes said he has always been interested in the bagpipes and plays most of the traditional Scottish instruments. When an opportunity arose to study with one of the best pipers in the area, he jumped at the chance.

"Michael Donelson, who is our pipe major, he is probably one of the finest bagpipe players on the west coast," Grimes said. "He started giving lessons and Cameron Holmes, one of the founders of the group, and myself started working with Michael. The group just started forming. Bagpipers are kind of a unique little group."

The group of 15 pipers and six drummers, with members from Williams along with Prescott and Flagstaff, practices Tuesdays at 3:45 p.m. at the LDS Church building, located on Rodeo Road.

Free bagpipe lessons are available to anyone interested in learning the Scottish musical heritage.

Grimes said students generally start on a bagpipe chanter for between six months and a year before graduating to the pipes. Learning fingerings for the bagpipes is the first hurdle with the second hurdle much more physical.

"It takes about 32 pounds of air pressure to keep that bag going," Grimes said. "It's a difficult instrument to play."

The chanter, along with taking less air to sound, puts out far less volume than full bagpipes. Grimes said the chanter is about as loud as a recorder.

"You don't pick up the pipes to learn a tune," he said. "You work for three or four weeks on a tune with the chanter and then you transfer your knowledge to the regular pipes."