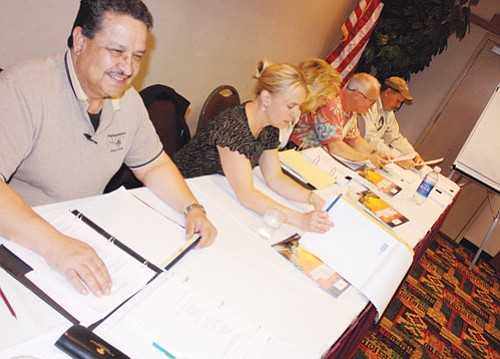 TUSAYAN, Ariz. - The interim Tusayan Town Council met for their first meeting April 7, marking a historic moment for the small South Rim community. Local resident Pete Shearer was chosen as the interim Tusayan mayor during the meeting. Council member Greg Bryan was chosen as vice mayor. While the meeting marked the first official assembly for the council, few decisions were made during the first meeting. Tom Belshe, with the League of Arizona Cities and Towns, spoke to council members during the public meeting about their first steps, which included discussion on the hiring of a city attorney and city clerk.

Bryan led those in attendance for the meeting in the Pledge of Allegiance following the council's first call to order. All Council members, who include Al Montoya, Clarinda Vail, Ann Wren, Bryan and Shearer, were present for the meeting. Montoya nominated Bryan for mayor following the council's roll call, while Vail nominated Shearer for the role. Following Shearer's appointment, Bryan was appointed vice mayor.

Belshe explained what the interim council's role would be in the formation of the city government.

"Mayor Shearer, members of the town council, it's my pleasure to be here," Belshe said. "This is an exciting thing and hopefully the information I provide you today will answer a lot of your questions. Today we're not going to get into the nitty-gritty of any one thing, except for the open meeting laws and some other, what I like to call 'hot water,' subjects that you need to know about."

He said the league plans to visit with council on a regular basis. Help from the league, he said, is designed to steer the city in the right direction.

Among other items, Belshe discussed shared revenues and their relationship with census estimates. Estimates, he said, will be based on the 2000 census and not the 2010 census that is currently under way. He said it would be extremely important to have census estimates completed as soon as possible due to the July 1 transition date - when the county hands over control to the Tusayan Council.

When it comes to up front payments, he said newly incorporated towns will have to rely on warrants to pay the bills prior to receiving income from taxes and other sources. Other discussion items included ordinances, time and place for regular meetings, and other organizational matters.

When it comes to the town's first election, Belshe said it was the opinion of the League of Arizona Cities and Towns that the official election be held Aug. 24.

"The league, we are not attorneys, I want to make that clear, but it is the opinion of the league that since the order took place on March 23, it is the following new fiscal year. The new fiscal year begins July 1 this year," Belshe said. "What you would be responsible for on July 1, there are three things, it would be roads, police coverage and administration."

Bryan, however, said that it could be possible for the county to extend the July 1 date should additional time be needed.

All five members of the Tusayan Town Council signed an Oath of Office April 6, then posted the first meeting following the signing. Members of the Coconino County Board of Supervisors approved a recommendation by a special advisory committee to approve the five-member council prior to the signing. Following the council's preliminary meeting, a number of work sessions will be held to further discuss the steps needed to officially form the town government.