Editorial: A lot going on at the Grand Canyon 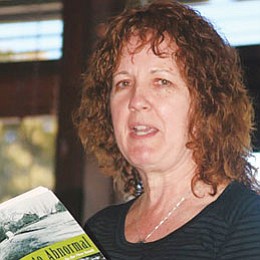 <br>Photo/Craig Andresen<br> Dana Wildsmith reads from her book 'Back to Abnormal' during the April 8 meeting of the Rotary on the Rim Club. Wildsmith is the April Artist in Residence at the Grand Canyon.

There will be no shortage of things to do at the Grand Canyon's South Rim in the coming days, particularly for book lovers and lovers of the Grand Canyon. On Friday be sure to get out to the library to greet author Jana Bommersbach when she pays a visit to the area. The One Book Arizona author's book, The Trunk Murderess: Winnie Ruth Judd, takes a hard look at the infamous 1931 Phoenix murder case. Her book began as a series of investigative articles that Bommersbach wrote for Phoenix New Times, articles that were eventually transformed into her book. Bommersbach began her career in journalism at the University of Michigan. She eventually moved to Arizona after she was offered a job at with the Arizona Republic. Bommersbach's Grand Canyon Library visit begins at 1 p.m.

Arizona Highways Editor Robert Stieve will also be in town Monday to talk about the historic, and widely popular magazine. Stieve will be at the Shrine of Ages beginning at 7:30 p.m. The magazine's May edition features the Grand Canyon, which is perfect timing for Stieve's visit. Stieve currently serves as editor in chief for Arizona Highways, a position he's held since 2007. Prior to his work with the magazine, Stieve worked for PHOENIX magazine as editor for eight years. He worked an additional three years there as managing editor. Stieve is also the adjunct professor at the Walter Cronkite School of Journalism and Mass Communication at Arizona State University, where he is also on the board of directors. He's also a member of the board for the Grand Canyon Association.

Author Dana Wildsmith is also visiting the Grand Canyon in the month of April and will be visible at a number of locations throughout the month. On April 8, Wildsmith visited the Rotary on the Rim Club for lunch and a reading from her book, Back to Abnormal. While in residence, Wildsmith met with students at Grand Canyon School, held an evening program at the Shrine of Ages and even ventured to Phantom Ranch for a reading.