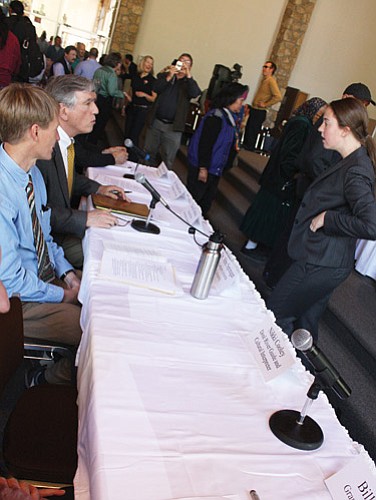 <br>Patrick Whitehurst/WGCN<br> Speakers prepare to address congress members during a special hearing at the Shrine of Ages at the Grand Canyon's South Rim.

GRAND CANYON, Ariz. - A number of conservation groups, members of the Havasupai and Hualapi tribes, National Park Service officials, and more filled the Shrine of Ages for a congressional hearing on April 8 to discuss the effects of uranium mining in the area, as well as other topics. Groups in attendance for the meeting included the Sierra Club, The Grand Canyon Trust, the National Parks Conservation Association and more. Reps. Raul Grijalva, Tom McClintock, Grace Napolitano, and John Shaddeg were on hand for the hearing. Grijalva recently introduced legislation that would formally withdraw more than 1 million acres of land around the Grand Canyon from new uranium mining claims.

Carletta Tilousi, a member of the Havasupai Tribe, was one of the many speakers present for the hearing.

"Within our reservation boundaries of 185,000 acres, the Havasupai is one of the only tribes in the country that has added in to our constitution for no uranium mining, or exploration or any development of any kind," Tilousi said. "Within our boundaries we do not have any type of uranium activity. The closest uranium activity that's currently happening right now is 13 miles from us."

The proximity to the mining, however, has raised concerns for the tribe, she said, in that heavy winds can often pass through the area in question and carry to the reservation. She said that tribal officials are also concerned that the mining could conceivably contaminate their water supply, though she added that she currently had no data to support those concerns.

"The thing with uranium is you cannot, see it, smell it, or touch it, or hear it come," Tilousi said. "We have experienced an increase in cancer."

Roger Clark, the air and energy director for Grand Canyon Trust, said the hearing highlighted both the economic and human implications of uranium mining at the Grand Canyon.

"This is the fourth hearing on the uranium bill on the Grand Canyon Watershed protection act and I think that portion of the hearing brought to a head people's understanding of, not only the economic implications, but also the human implications with the Native American presence," Clark said. "The economic implications, I think, pretty much showed that the industry feels that it has a right to move into the landscape around the Grand Canyon and mine out all the uranium. We feel that it's not in the economic best interest of our region given the sustaining basis of tourism, the industrialization of the watershed isn't in our best interest."

He added that the recent hearing also highlighted the broad support for uranium withdrawal from various organizations and individuals in the southwest.

"We had representatives, at least in the room, from five different tribes in the region and we heard testimony from two," Clark said. "We had the Sierra Club, National Park Conservation, and the Center for Biological, three national organizations there in the room. We had the Grand Canyon Trust, which is a regional organization. We had people in the boating industry, from recreational tourism in the room, it was just a good turnout of local and regional leaders."

Clark said he plans to return to Washington D.C. where he hopes to continue progress on the watershed protection act.

"I work a lot on the uranium issues so my hope is that we go ahead and get the Grand Canyon Watershed Protection Act out of the house. We'll be headed back to D.C. with some of our Havasupai friends fairly soon to reinforce that message with Congress," Clark said. "We're trying to build support in the Senate. So far McCain and Kyl have been unresponsive to our requests, so we may need to go elsewhere to get a sponsor."

In 2009, Secretary of the Interior Ken Salazar segregated roughly 1 million acres of land in the Arizona Strip for a two-year "timeout" from new mining claims in order to give the department time to look into the effects on uranium mining on the Grand Canyon area's natural resources. Their findings could lead to the withdrawal of the land from new mining claims for 20 years. A U.S. Geological Survey report evaluating uranium resources can be found online at http://pubs.usgs.gov/sir/2010/5025/.

While Salazar's current withdrawal is scheduled to last two-years, the legislation is seeking a more permanent resolution, Clark said.