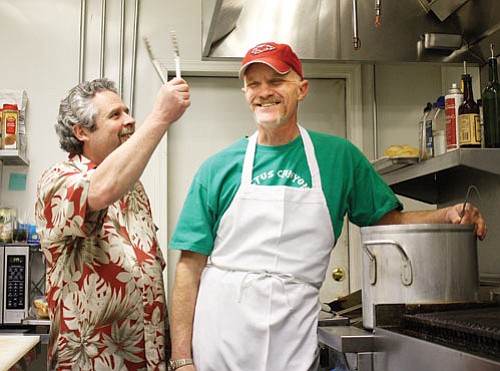 WILLIAMS - The smell of barbecue - ribs, brisket, you name it - wafts through the air in downtown Williams all summer long courtesy of local restaurants and residents. But this summer, barbecue aficionados are in for a real treat when the Northern Arizona Barbecue Festival hits town.

Event organizer Chuck Vaughn moved from Missouri, just north of Kansas City, to Williams in 2006. The owner of Joe's Diner in Barnard, Mo., Vaughn knows a little bit about barbecue.

"American Royal Barbecue is the world's largest barbecue," Vaughn said. "I owned a little diner up in Barnard, Mo. and so we got into county fair barbecuing and got started in American Royal."

Vaughn competed for seven years at the KCBS sanctioned American Royal contest held in Kansas City. In his best finish, he placed fifth in the baked beans contest and, out of 500 teams, tied for 10th place in the barbecued ribs category.

KCBS is a nonprofit organization dedicated to promoting and enjoying barbecue and, according to their Web site, is the world's largest organization of barbecue and grilling enthusiasts with over 10,000 members worldwide.

KCBS sanctions close to 300 barbecue contests per year in the U.S. The competition in Williams will be a state championship and a triple-crown event. Vaughn said an official KCBS judging panel will judge contestants at the competition held in Williams.

"They fly in judges," he said. "There are going to be professional judges coming in."

The festival will be free to the public and feature a beer and wine venue and live music over the course of both days. Vaughn explained that some teams will arrive the night before the event and smoke beef brisket for up to 17 hours.

The family event will also include a "kid's corner" with activities for younger attendees. The Knockabouts, out of Flagstaff, will perform beginning at 2 p.m. on July 3.

Tasting tickets will be available to sample barbeque the "pros" cook up. Half of the proceeds go back to the barbeque teams with the remainder benefiting Special Olympics Arizona.

Winners will be announced and trophies and prize money presented at 4 p.m. A street dance featuring Whiskey Rodeo, also from Flagstaff, will begin at 8 p.m.

"After the barbecue guys pull out we'll have a big open area for a street dance," Vaughn said. "Our idea is we want it to be more of an open event. People can come in. They can do the barbecue. They can walk around town. They can come back and listen to the music. We'll have different things going on all day long."

Along with the tastings, full barbecue meals will be available; although Vaughn said he hopes those in attendance will sample all of the other dining options available in Williams.

"We're not going to go overboard on the vending because we want people to go and try the different places around town, too," he said.

The festival continues on July 4 with an amateur contest beginning at noon. Vaughn said he hopes to have lighthearted throw downs between local officials and residents alike.

"It's not as stiff a competition as the professional one but maybe we can have throw downs between the mayor and the police chief and stuff like that and have a lot of fun," he said.

A beer garden will also be available on July 4 with local band the Sweet Lemons providing live music. The annual Williams Fourth of July parade will bookend the event at 6 p.m.

Vaughn said response to the competition from those in the barbecuing community has been strong.

"With $10,000 in prize money, we're kind of nervous that we might be overgrowing our bounds and have to push a wall back somewhere to put a couple more teams in," he said. "But, we'll squeeze them all in. It wouldn't be the worst thing in the world."

David Haines, Williams Main Street Association president, said his goal in sponsoring the event is to create an event unique to northern Arizona with the potential to grow into one of the state's premier events. Some of the events proceeds will also provide seed money for downtown improvments.

"We're trying to raise funds to put into streetscaping on mainstreet," he said. "So it would be beautification of the city. Improving the business district."