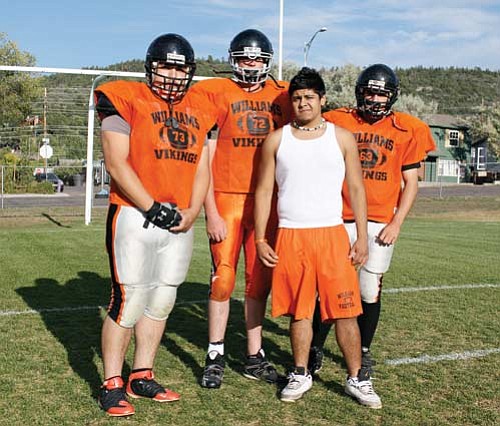 <br>Ryan Williams/WGCN<br> The Viking offensive line came alive in the second half of their win against Grey Hills. Pictured left to right are Christian Prieto, Chase MacArthur, Eric Leon and Kole Wiese. (Not pictured: David Flores and Jr. Esparza.)

WILLIAMS - For the second week in a row, the Williams High School Vikings survived a difficult second quarter, falling behind by the end of the second quarter, but eventually pulling out a win, 28-22. The Viking defense came on strong after half time, intercepting the ball twice and preventing Grey Hills from scoring in the second half.

The Viking offense started the game strong with Tyler Krombeen running the ball 48 yards for a touchdown on the first possession of the game. Grey Hills came back, scoring early in the second quarter and completing a two point conversion to bring the score to 8-7. The Vikes then countered with a 35-yard touchdown pass from Darius Brown to Guy Forbis.

"From that point on it seemed like the ball never bounced our way. Seemed like we had to earn everything we got that day," he said. "Second quarter, we just had a hard time managing the game really."

Grey Hills then proceeded to score 14 unanswered points. After a kick return left the Vikes on their own five yard line, Grey Hills recovered a fumble in the Vikes' endzone going into half-time leading the game 22-14.

"We struggled on special teams a little bit this week," Brownlee said. "We need to work on some special team issues and to make sure we come out with the proper intensity in the first quarter. We seem to be getting behind in the last two games. We need to be a little more disciplined and concentrate and get ourselves mentally ready to go."

At the start of the second half, the Vikes' defensive line took charge, not allowing Grey Hills another point in the game. Eric Leon caught an interception for 15 yards, with Guy Forbis catching an errant Grey Hills pass to end the game. The Vikings went on to score once in the third quarter quarter and again in the fourth quarter.

"Our defense allowed us to win the ballgame," Brownlee said.

Guy Forbis scored on a 35 yard pass from Brown and Junior Esparza caught a 15-yard pass for a touchdown.

Brownlee said the Vikes will be ready for their homecoming game this week against Valley-Sanders and are getting ready for a challenging second half of the season.

"We play Valley-Sanders, they travel here to play homecoming night on Friday night and our kids will be pumped and they will be ready to go," he said. "We're getting ready to start a big push. We're playing the last half of the season. We took care of the first half, now it's time to take care of the second half. We have key games against Red Mesa and then the last game against St. Johns. So we have to prepare ourselves for the better teams."

The Vikings take on Valley-Sanders in this year's homecoming game on Friday at 7 p.m. They go up against Red Mesa in an away game, Friday, Oct. 9.