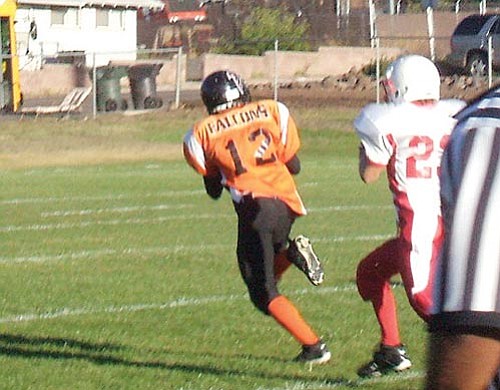 WILLIAMS - Although the Williams Elementary-Middle School Falcons put up an intense battle against Prescott's Mile High Middle School last week, they eventually lost to their undefeated opponent. The falcons now drop to second place in the division with a record of 4-2 for the season. Mile High is currently the only undefeated team in the division.

Prior to their loss against Mile High, the Falcs beat Sedona Middle School 28-8 on Sept. 22 in Sedona. Quarterback Kohl Nixon went 2 for 4 passing for 84 yards and ran the ball 5 times for 97 yards and two touchdowns. Other standouts included Coty Baxter who had 13 carries for 102 yards and two touchdowns, Jorge Davalos who carried the ball two times for 10 yards and Leo Lopez who had two receptions for 42 yards. Austin Kennelly also had an interception and Christian Plasencia had a fumble recovery.

Coach Herman Nixon said the Falcs played hard and put in a solid effort before eventually losing to Mile High with a final score of 32-12.

"Mile High is a powerhouse when it comes to middle school football, they brought only eighth graders to play us and had a total of 30 players in Williams," Nixon said. "We gave them a hard fought game and I am very proud of how the boys played."

Nixon said the Falcs defense was strong throughout the match up against Mile High.

"Our defense played tough throughout the game with Andrew Payne, Christian Holmes, Christian Plascenia, Kendall Brown and Alexis Soto making several tackles on the defensive line," he said. "Austin Kennelly and Jorge Davalos also came up big for us knocking down several passing attempts by Mile High and Davalos coming up with an interception."

The Falcons play Granite Mountain today in an away game and travel to Chino Valley this Saturday. The Falcs need wins in both games in order to play Mile High again in the championship bowl.