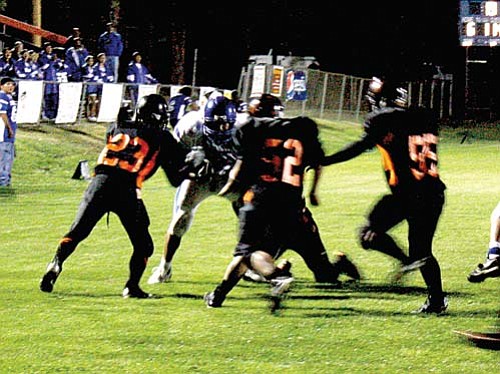 <br>Ryan Williams/WGCN<br> Guy Forbis, 23, Eric Leon, 52, and Chuckie Sandoval, 55, shut down Hopi's offense on the 15-yard line at the close of the first half.

WILLIAMS - The Williams High School Viking football team had a tough first quarter in their match against Hopi last week. After falling behind in the first half, the Vikes eventually pulled out a win with a final score of 39-14. The Vikes remain undefeated with a 4-0 record.

After a strong drive early in the first quarter to Hopi's 25-yard line, a turnover lead to a Hopi touchdown setting the tone for the first half.

After Hopi's initial touchdown, the Vikings drove the ball well, scoring a touchdown in return. The Vikes were unable to convert the extra point, making the score 7-6. Hopi then ran the kick return back for a second touchdown in what Coach Jeff Brownlee characterized as a special teams breakdown.

"Really, in that first quarter, we shot ourselves in the foot," Brownlee said. "We definitely could move the ball. We did what we wanted to do but there were a couple of areas where we weren't disciplined enough to keep the momentum."

Brownlee said the second quarter of the game was one of the strangest quarters he had ever been involved in. Hopi maintained possession of the ball for the majority of the second quarter. As the first half came to a close, the Vikings' defense held Hopi at the 15-yard line, preventing a Hopi touchdown.

"Our defense may have bent, but we didn't break," he said. "We made a heck of a stand there at the end."

Despite the efforts of the defensive team, the Vikings went into half time down 14-6.

At the start of the second half, the Vikings kicked off, eventually forcing Hopi to punt.

"From that point, our offense just said, 'This game is ours.' Our offensive line did outstanding," Brownlee said.

Brownlee emphasized the offensive line, which includes Chase MacArther, Eric Leon, David Flores, Cole Wiess, and Christian Parito, stepped up big in the second half, changing the tenor of the game completely.

Krombeen carried the ball 19 times for 265 yards and four touchdowns. Quarterback Darius Brown completed four of nine passes for 38 yards with two touchdowns in the air to Guy Forbis.

The Vikings travel next to Tuba City to take on Grey Hills on Friday. Brownlee said Grey Hills, 2-2 for the season, will likely put up a good fight on the field.

"They'll be one of those teams that will be scrapping all the way. So I look forward to a good football game. But of course with us coming out on top," he said.