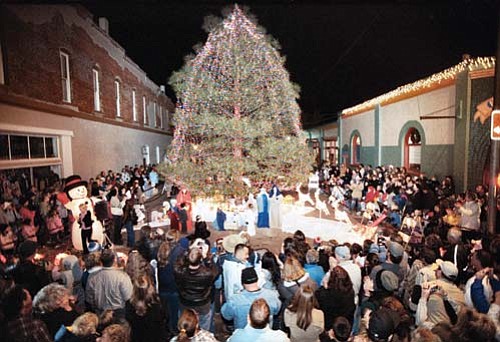 <br>Photo/WGCN<br> The lighting for this year's city Christmas tree is scheduled for Nov. 28 following the holiday light parade.

WILLIAMS - It's beginning to look a lot like Christmas, at least in the minds of organizers for this year's Christmas celebration in Williams who are already working out the details for the 2009 gala event. This year's theme is "A Time for Christmas, Christmastime in Williams," according to Sue Atkinson, event coordinator for the Williams-Grand Canyon Chamber of Commerce, which is putting on the event this year.

"It's being planned with the new chair Jim Winbourn, who is taking over for Diana Croteau who has stepped down this year as committee chair," Atkinson said. "The committee is busy planning the Christmas tree event this year. We are currently seeking sponsors for this year's event. It is the biggest budgeted event we do, having to decorate the town, the tree, to decorate Monument Park (and) to do the Christmas Village. We're trying to bring more of a whimsical theme. It is in conjunction with Polar Express, which is geared toward the family and kids."

When it comes to the Christmas Village, located in prior years at the east end of Route 66, Atkinson said no new facades will be provided this year, but the village will remain on display. There are currently a little over 40 facades.

"We just don't have an artist lined up, but anyone who has participated in the past, façade sponsors, is $100," Atkinson said. "We're moving the Christmas Village down to the Visitor Center this year. It's going to be located all along the south side and into that little park area on the west end of the Visitor Center. I think it's going to be better visibility for our sponsors. We'll get more foot traffic and people will be able to enjoy the facades more and see who's a part of it, rather than zipping past it. It will be a lot easier to maintain."

She said the arrival of the city's Christmas tree, which has become a highlight in the community, is tentatively scheduled for Nov. 19. A Christmas tree for the nation's capital is also going to tour through Williams as well, Atkinson said.

"It's being cut down in Show Low and they're going to do a little tour before it goes to Washington. It's going to come through Williams," Atkinson said. "It's tentatively scheduled for Nov. 17, two days before we bring our tree in. I think it goes on the lawn of the White House. It's 70 feet tall."

Organizers also plan to combine the light parade and the tree lighting ceremony this year, so that both events will be held on the same night.

"It will be Nov. 28, the Saturday after Thanksgiving, starting at 7 p.m. We'll have the light parade immediately followed by the tree lighting. Santa is going to light the tree this year," Atkinson said, adding that Dickens carolers and costumed characters will also be among the highlights for the 2009 Christmas event in Williams.

Christmas event organizers also plan to hold a parking lot sale Saturday, in conjunction with Clean Up Day, to sell Christmas decorations and lights that are not being used by the committee for the celebration.

"The Chamber, as it has done in year's past, will also be implementing a residential and business lighting contest," Atkinson said. "We're doing it all this year."