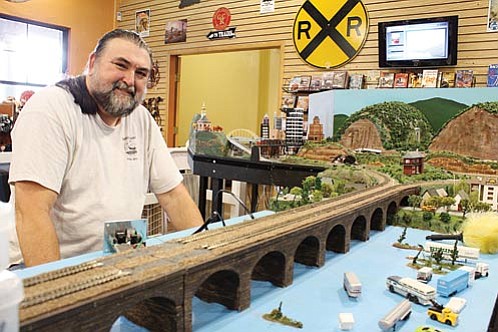 WILLIAMS - The Grand Canyon Railway Gift Shop featured the N scale model train layouts of the Prescott Valley N-Trak Club and the Mountain Valley N-scale Club this past weekend. The two clubs each set up three approximately 10 foot by 14 foot modular layouts. Two of the layouts were connected by a six foot scale replica of one of the bridges spanning the Susquehanna River in Pennsylvania.

The layouts are built by piecing together two foot by four foot, detailed modules set on 40 inch tall stands. The modules depict different cities, regions or landmarks in the United States. At any given time, up to 12 trains circled the tracks laid out in the Gift Shop.

Larry Davis, from the Prescott Valley N-Trak Club, said it has taken him years to create the club's current layout due to the extensive and detailed work involved.

"The model train layout was started in December of 2001 and by February of 2002 only two modules had been completed," he said.

"Not so surprisingly, people around here love trains," Matson said. "We're in the process of becoming a Lionel authorized hobby shop. Paperwork's been sent in. We should know back shortly."

In order to become a Lionel authorized shop, the gift shop needed a working model train layout. The railway's facilities manager has built a four foot by eight foot layout reminiscent of a '50s vintage Lionel layout. Matson says the shop helps to draw tourists to Williams by adding another dimension to what the city has to offer.

"Each shop seems to have something unique from the others and for us, for the railroad aficionados, the model railroaders, this is our forte," he said.

Matson went on to say that most people don't come to the gift shop looking for full model train sets or the components needed to put a set together. Instead, collectors and railroad buffs visit the railway looking for unique train cars and individualized train products.

"So, in the not so distant future, we'll have Lionel products and other model railroad company products that we've painted in our Grand Canyon Railroad colors. So we'll have our workable model railroad steam engines, diesel engines, some of the rolling stocks and of course the beloved Harriman cars," Matson said.

Eventually the shop will feature its own 4 by 14 N scale layout along the south wall. The eventual goal is to build a scale representation of downtown Williams to be completed sometime in 2010.

More model train displays may make their way back to Williams in the future.

"We're hoping to invite the clubs back to entertain visitors and the kids from the community," said Matson. "We hope to invite other clubs, such as the garden clubs, which are the larger scale clubs that we may have set up out on the properties."