Gotta love all the chili
Rotary chili cook off is Monday 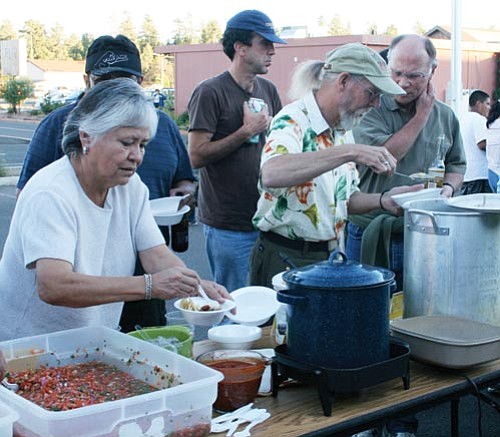 <br>Photo/GCN<br> This year's chili cook off will be held Monday beginning at 5 p.m. at the Tusayan Fire Department, pictured above during a past cook off.

TUSAYAN, Ariz. - Have a hankering for chili? Is there ever enough cornbread for your tastes? How about homemade tortillas and salsa? If your mouth is beginning to water at the mere mention of these delectables, then you had better make it to the Tusayan Fire Department this Monday.

Organizers with the Grand Canyon's Rotary on the Rim club will hold their annual Rotary Chili Cook Off from 5-8 p.m. Anyone who wants to register for the event must enter by 5 p.m. at the Tusayan Fire Department. Tasting begins at 5:30 p.m. Beer and water will be available for sale at the popular event.

Grand Canyon Rotarian David Smith said the chili cook off is always a fun event for the community. He said a grand prize will be awarded to the cook who prepares the best chili.

"It's the overall best chili," Smith said. "And then there's a community prize as well, where everyone that's there votes on it."

He said a number of judges will be involved in the annual cook off, including local chefs.

"There's usually about five judges from the community or from the (Rotary) Club that decides which are best," Smith said.

According to organizers, a $50 cash prize will be awarded to the event's grand prize winner. Categories for the Rotary-sponsored event includes traditional chili, alternative chili (including green, veggie and chicken), cornbread, homemade tortillas and homemade salsa.

Awards for community grants will also be presented during the event, organizers said.

"The community grants will be awarded. It's always fun," Smith said. "Navajo tacos will be on sale as well. Everything else is free. It's a free food event for the community. It's one way that the Rotary Club has to give back to the community."