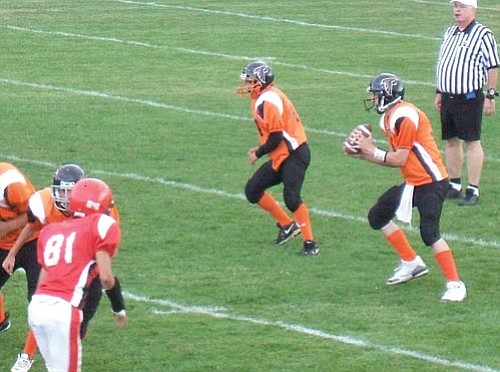 WILLIAMS - Defensive errors and two key turnovers turned out to be too much to overcome for the Williams Elementary-Middle School Falcons when they took on Cottonwood at home last week. The Falcs were handed their first loss of the season with a score of 32-12.

The Falcons scored the first touchdown of the game on an 85-yard kickoff return by Quarterback Kohl Nixon. Coty Baxter scored the Falcs' only other touchdown on a 21-yard pass from Nixon. Coach Herman Nixon said turnovers on two offensive drives stunted the Falcs' offense.

"Our offensive line played very well, but we had two fumbles on offense when we were moving the ball down field, which stopped our scoring drives," he said. "The two fumbles were the difference in the game. We would have scored on both drives but we couldn't recover after losing the ball twice on long drives."

Quarterback Kohl Nixon went 9 for 13 passing for 151 yards with one touchdown and one interception. He also ran the ball six times for 48 yards. Coty Baxter had an excellent game, running 88 yards on 14 carries along with two receptions for 76 yards and a touchdown. Jorge Davalos ran the ball for 51 yards on nine carries and Leo Lopez caught the ball twice for a total of 28 yards.

Nixon said Cottonwood arrived with a strong offense but also stressed that the Falcons' defense just didn't put together a strong showing.

The falcons take on Mile High Middle School at home this Thursday at 3:30 p.m. Mile High will likely be a difficult opponent, having beaten the Falcons twice last season, once during league play and a second time in the championship game.