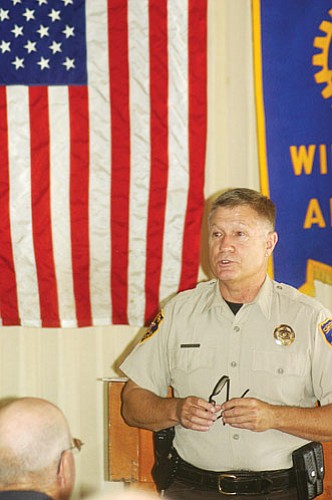 WILLIAMS - Inmates of Coconino County will continue to clean around the city each Thursday, thanks to a recent partnership with the Williams Clean and Beautiful organization. Coconino County inmates will be visible in and around the Williams area as they pick up trash and perform other duties. Coconino County Sheriff Bill Pribil, who visited with members of the Williams Rotary Club Sept. 11, said an inmate work crew in the Flagstaff area has been hailed as a success, particularly when it comes to saving taxpayer's dollars. In 1994, Pribil served for a short period as acting city manager for the city of Williams.

"My goal has been, for quite some time, to increase it to a second inmate work crew, but not to commit them just to the park and the county recreation department, but to begin having them come to our communities," Pribil said.

He said the goal is to help out in cities that may not have the resources to do so on their own. In Williams, for instance, work crews will perform various jobs every Thursday.

"They will be here every week," Pribil said. "And if there is an even bigger project, I'm sure we can get them here more often than that. It's a win win. It gets them out of the jail, where all they do is watch TV. Actually they enjoy doing what they're doing. They like the work. They are not felons. They are low level criminals and many of them have been brought to our attention because of alcohol abuse."

He added that an armed detention officer accompanies the work crew at all times.

Future plans might include having inmate crews work on private property, such as private homes, for senior citizens, disabled citizens, and other who may not be able to perform the work on their own or those who cannot afford it.

Carol Glassburn with the Williams Clean and Beautiful Committee called Pribil her hero during the recent Rotary Club meeting.

"Bill Pribil called me and offered his help," Glassburn said. "They cleaned up the rodeo grounds and transfer station. They're weeding the park, they're cleaning out the drainage ditches; it's just amazing that we have that opportunity."

At roughly 18,500 square miles, Coconino County is the second largest county in the United States. The Williams District of Coconino County is considered to be the second busiest one for the sheriff's office. The district covers Tusayan and as far as the Grand Canyon Caverns. Brian Tozer is the lieutenant in charge of the district, Pribil said.

"We are seeing growth in areas of the county north of Ash Fork, in Kaibab Estates, we're seeing more and more activity in that area. As people move in they're asking for more services," Pribil said, "It's been a real strain on our Williams District."

Sheriff's Officers responded to over 37,000 calls for service in 2008 alone. A total of 48 officers work for the department, Pribil said.