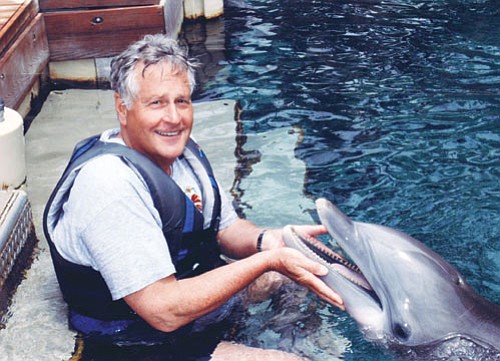 <br>Submitted photo<br> Veterinarian Fred Bush with one of his friends. Bush visits the Canyon to offer his veterinarian services once a month, as he has for the last 33 years.

GRAND CANYON, Ariz. - Veterinarian Fred Bush has been a fixture at the Grand Canyon for over 30 years and he's not showing any signs of slowing down. Bush's services are offered at the Grand Canyon Kennels on the second Tuesday of every month from 12:30 to 3 p.m. He's been making the rounds at the South Rim since 1976. Bush typically brings one technician along with him, as well as a supply of prescription food for cats and dogs that are on special diets.

"I've only missed two months in 33 years and that's because it snowed so bad in Flagstaff, we couldn't get out of the parking lot here at the hospital, and then one time Clinton came up there on a Tuesday and the roads were closed. We had to turn around and go back," Bush said, adding that he performs a number of tasks during his Canyon visits.

"We vaccinate, do minor surgery, any kind of illness we'll take them back with us to the hospital - any major surgery we'll take them back," Bush said. "I can diagnose and have a medicine box. I have three different boxes I carry medicine in, so we examine, diagnose and (prescribe) medicine. We can draw blood up there and bring it back here, for diabetes, low thyroid, or general vomiting. We can take a fecal sample up there and bring it back."

He said there were few veterinarians in northern Arizona in the mid to late 1970s when he started his practice.

"In 1976 it was just us, Dr. Fyfe at Coconino and Dr. Westover at Aspen. So there were only three vets in town. We would go up to Tuba City once a month, we would go to Grand Canyon. It was a practice builder," he said. "We'd go to Grand Canyon once a month and actually we'd go to Williams twice a month and be there at the rodeo grounds. We would stop and make calls in Parks and Bellemont. We did horses back then."

Bush moved to northern Arizona after attending college in Oklahoma. He went to Old Miss in Mississippi, then to vet school at Oklahoma State University.

"What brought me out here was we had to do an internship," Bush said. "They had a map of the United States of all the Oklahoma State graduates and there was one in Flagstaff. I came out here in '59 when I was 14 and was impressed with northern Arizona and liked the part where it was freezing in Flagstaff and you could go swimming in Phoenix. I interned out here and they had a job opening out here in June of 1976. I took the job and I've been out here ever since."

He operates the Flagstaff Animal Hospital with his associate, Ruth Ann Decou, who has been with Bush for 12 years. Call (928) 779-4565 for appointments in both Flagstaff, and for his routine Grand Canyon visits.