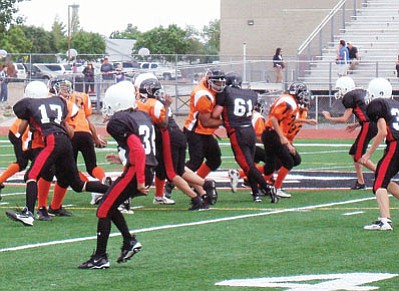 WILLIAMS - The Williams Elementary-Middle School Falcons took on physically imposing Glassford Hills Middle School last week, coming away from the gridiron battle with their third win of the season. The Falcs, who remain undefeated, prevailed with a score of 18- 8.

Coach Herman Nixon said that, although the Falcs pulled out a win, the team did not play an error free game.

"We made several key mistakes on offense against a very big and physical Glassford Hills team, but we overcame those mistakes and came away with a win," Nixon said.

The Falcons held Glassford to just one touchdown and one extra point. Nixon said defensive standouts included Kohl Nixon, who had two sacks and a fumble recovery, Christian Holmes, with one sack and three unassisted tackles, Alexis Soto, who had one sack and two tackles, Jorge Davalos and Coty Baxter.

"This game was all defense for both teams and our defense came up big," Nixon said.

All three of the Falcs touchdowns were scored by Quarterback Kohl Nixon with runs of 55 yards, 25 yards and 22 yards. Nixon carried the ball 11 times during the games for a total of 151 yards. Coty Baxter and Jorge Davalos played crucial roles as lead blockers for all three touchdowns. Both players also ran the ball well, with Baxter carrying the ball 11 times for 72 yards and Davalos running 58 yards on eight carries.

The Falcons hope to continue their winning streak today at 3:30 p.m. in a home game against Cottonwood.