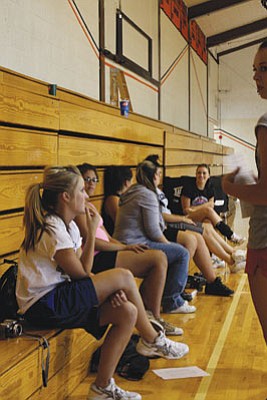 WILLIAMS - The Lady Vikings Volleyball teams traveled to Flagstaff last week taking on Northland Prep. After coming out strong and winning the first game 25-12, the varsity team lost the second game of the match 25-22. They went on to win the remaining two games, beating Northland in four games.

Although Coach Jennifer Carter was pleased with the win, she did say the team lost focus, not playing to their potential.

"They played very well. They won, which I was really happy about. We have some working out to do. They shouldn't have lost the second game, you know they kind of just, they took the first game and thought that maybe, you know, lets play with a little more ease and not have to worry about it. I don't think that they played at their best level and they kind of just gave away that second game," Carter said.

The Vikes' junior varsity team played two matches against Northland Prep winning the second of the two. Much like the varsity squad, the JV team took the first game of the first match 25-13. They then lost the next two games, 25-28 and 15-12.

Carter said the JV team also needs to work on keeping their focus throughout their matches saying, "They just weren't in the game. They handed it to them."

The Lady Vikings are currently in the middle of a demanding stretch of matches facing off against Sedona tomorrow at home. Carter said the women will need to work on staying in the game and playing at 100 percent.

"We just really have to go back to the fundamentals. Get the bump, set and hit and get our serves over and be there to play," she said.