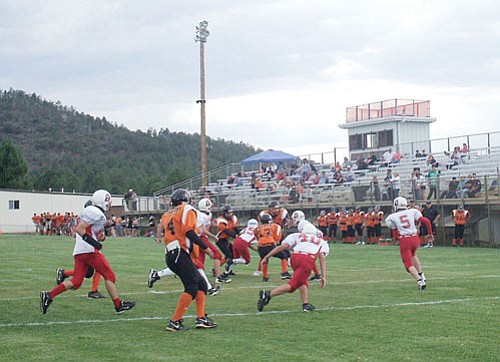 Photo/Sharon Weems The Falcons ran the ball well during their 28-4 victory over Bradshaw Mountain.

WILLIAMS - The Williams Elementary-Middle School Falcons came out strong against Prescott Valley's Bradshaw Mountain, standing up to their opponents with a strong defense while offensively running and passing the ball well. The Falcs are now 2-0 after beating Bradshaw 28-4 Sept. 2.

Coach Herman Nixon said all of the offensive activity was only possible with the help of the Falcs' offensive line.

"I'd like to give credit to our offensive line Christian Plascencia, Alexis Soto, Jordan Brown, Kendall Brown and Andrew Payne. Without their effort the running backs and receivers couldn't have had the game they did," he said.

"I am very proud of our defensive unit who held a big and physical Bradshaw Mountain to only 14 points," he said. "Our defensive ends Alexis Soto and Kendal Brown kept their offense from going outside, which made the difference in the game. Several of our defensive players had big games including Kohl Nixon who had two sacks, Christian Holmes who had six unassisted tackles and one sack, Jorge Davalos who had one sack and four unassisted tackles and Coty Baxter who knocked down several long passes from Bradshaw stopping any large gains by their offense. "