Editorial: A wireless world not so new 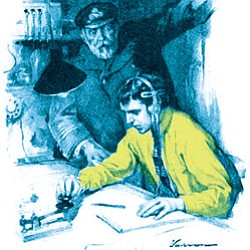 These days, the word "wireless" conjures up images of people with laptops in coffee shops and folks with iPhones at the grocery store, among other, once isolated, locations. It has never been easier for folks to connect to the Internet, or faster, as the dawn of broadband and high speed connections can attest. Individuals can now access networking systems and other online forms of communication quicker than ever before. For many, such as those at Grand Canyon Resorts on the Hualapai Reservation (see the story on Page 1B), this means better service for their employees and customers. For others, it simply means they can check their e-mail while they wait in the checkout line at the shoe store. In either event, the communications age continues to get faster and better.

Some say that comparing broadband, high speed Internet connections to dialup phone connections is like comparing a garden hose to a storm drain, as some connection speeds are roughly 40 times faster than dial up, while others are only 10 times faster, but still a far cry from the sluggish phone line system. Dial up is quickly becoming an antiquated way to access the World Wide Web, if it isn't already. Most Web sites, for instance, are already designed for those with faster connections and are virtually inaccessible to those with dialup. Dialup still remains, however, as many prefer the inexpensive connections to the more costly high speed, wireless devices.

The word "wireless," however, is not a new one. Younger generations may be surprised to learn that the word was once common when their great-grandparents, or great-great-grandparent's, were young. Wireless radio broadcasting, such as that which Guglielmo Marconi used in the late 1800s, was a common fixture when it came to long distance communications in that era of history. Large seafaring vessels were commonly equipped with wireless sets, such as ships in the Royal Navy and other large boats. Some military aircraft carried the heavy equipment, which was used to determine enemy positions in World War I. In the early days of wireless communication, however, these broadcasts were nothing more than short bursts of signals, most using Morse Code, that were sent from one location to another.

While Marconi is credited with a number of profound breakthroughs in telecommunications, many other individuals contributed to the field. Scientists such as James Clerk Maxwell, Aleksandr Stepanovich Popov, William Preece and Heinrich Hertz are all celebrated contributors to the field.

While the idea of "wireless" has a different meaning in today's age, the overall goal is the same - to commincate over a great distance quickly and efficiently. Past breakthroughs helped make today's wireless marvels possible. And today's achievements will undoubtedly serve as the groundwork for wireless astonishments yet to come.