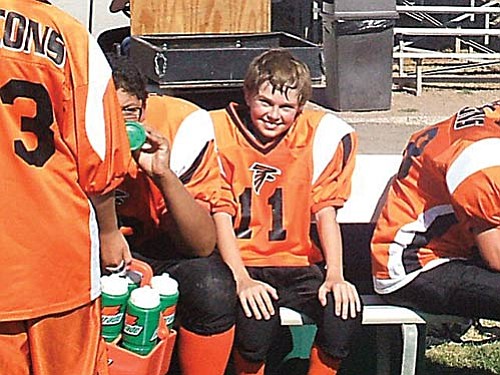 <br>Photo/Sharon Weems<br> WEMS Falcon player No. 11 Tanner Jackson takes a break on the sidelines during the team's recent game against Camp Verde Aug. 25.

WILLIAMS - After a strong 2008-2009 season, the Williams Elementary-Middle School Falcons began their 2009-2010 on a high note. The Falcs took a strong win against Camp Verde Aug. 25, winning the Williams away game with a final score of 56-0. The Falcons were 10 and 2 last season.

"We went in with high expectations from last year," said Falcons Coach Herman Nixon. "We knew the teams were going to be gunning for us."

The Falcons coaching staff includes Nixon, Tad Wygal, Fred Heggestad and Deniz Brock. Nixon said they started the Aug. 25 game with five returners on offense. Coty Baxter ran for six touchdowns in the game. Jorge Davalos ran for a touchdown of his own as well.

"It was a good game because all the kids got to play," Nixon said. "This year we had to switch Kohl Nixon from tight end full back to quarterback. He threw for about 150 yards and rushed for about 100 yards. We had Leo Lopez who had two interceptions. Overall we made some changes, moving Kohl from tight end to quarterback. We had to make a lot of adjustments just because we lost so many kids from that championship team last year. And they really came out and played."

The Falcons practice at the middle school football field Monday through Thursday following classes. Practice typically runs from 4:15 to 6:30 p.m. The team will take on Bradshaw Mountain at Williams High School today beginning at 3:30 p.m.

"We're back in the Northern Arizona Football League. We're actually the smallest school in that whole thing," Nixon said. "Hopefully we'll end up back in the championship."

Unlike past years, a large turnout came forward to play for the Falcons team this season.

"The last two years we've only had 18 to 19 kids. We've got 25 kids who are out there working hard everyday and I'm just hoping the program keeps building," Nixon said. "We've got some good athletes coming up."