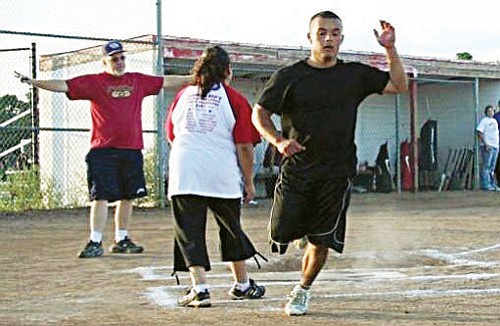 GRAND CANYON, Ariz. - Two weeks ago, the Red Feather softball team won the regular season title with a 10-3 record in a convincing victory in the 1-game playoff vs. NPS. Last Tuesday they continued their dominance by sweeping through the double-elimination post-season tournament with a 4-0 record.

According to League Commissioner Mark Harner, the championship game was, "easily the most exciting softball game in recent years at Grand Canyon." Playing near flawlessly for the first six innings, McDonalds took a one-run lead into the final frame. The first two batters were easily retired by McDonalds pitcher Lupe Duran, who had courageously played the entire tournament with a severely pulled muscle. Duran kept the Red Feather hitters off balance all game just as he had other teams throughout the tournament.

Down to their last out, Red Feather leading hitter Andrew Aldaz came to bat. There would be no Mighty Casey story this night. Aldaz crushed the pitch deep into the right-center field gap. The McDonalds fielders got the ball in as quickly as possible, but Andrew crossed the plate ahead of the throw with a game-tying home run. Following an infield single by catcher Azuela de la Torre, who had earlier made two outstanding catches behind the plate, Rick Wiles came to the plate. Wiles promptly laced a walk-off double to that same right-center field gap, scoring de la Torre with the winning run.

Despite the devastating loss, McDonalds coach Rafael Balbuena was very gracious, saying, "Red Feather played a great game." He went on to thank his players for "an outstanding season and final tournament."

Red Feather coach Julie Aldaz attributed much of their success to continuity saying "Most all of our team has been playing together since 2002. We add in a few players, but for the most part we are the same team. Our MVP would have to be Greg Walker. Without his consistent pitching, our team would struggle."

With the 2009 season in the books, Harner says that they still are planning a charity 1-pitch tournament for a weekend late in September. Details will be available at the community Rec Center within the next week and anyone in the Grand Canyon area, including Williams and Flagstaff, are invited to field a team.