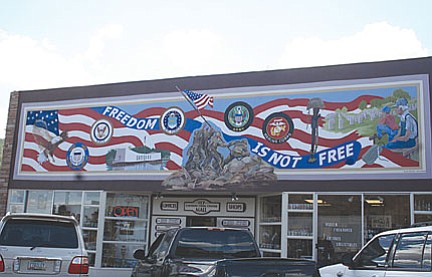 WILLIAMS - A colorful mural now graces downtown Williams. The Legion of Honor mural, designed to honor veterans past, present and future, was completed August 21. The mural located on the wall above the shop windows at 117 E. Route 66 was painted by local artists Mike and Sandy Rusinko and measures 10 feet tall by 48 feet in length.

Al Dunaway with the American Legion Grand Canyon Post says that that the mural has been completed, public response has been overwhelmingly positive.

"It's amazing. People are stopping in the street to take pictures. People are standing on the sidewalk taking pictures. Channel 12 News was up here Wednesday and put it on the news in Phoenix 4:30 and 10 o'clock news Wednesday night. The response has been overwhelming for it," he said.

Dunaway felt sure the mural would generate a positive response from town residents as well as tourists passing through.

"I thought that this was going to be an eye catcher like nothing else in town when it went up and the response has all been basically positive. Everybody loves it," Dunaway said.

People have even approached Dunaway to find out who is paying for the mural and then make a donation.

"A former Marine, he stopped, looked at it and asked me 'Well who's paying for it,' and I said we are, the American Legion, and he reached in his pocket and handed me 20 dollars and says, 'I want to donate because I want to be part of that.' When people like it enough that they start pulling money out of their pockets, you know they like it then," he said.

A proposal for the mural was authorized by city officials at the regular meeting of Williams City Council July 9. The decision came after the matter was tabled for further review on May 14 after vigorous debate between Legion members and the Williams Main Street Committee on whether the mural conformed to city guidelines for downtown Williams.