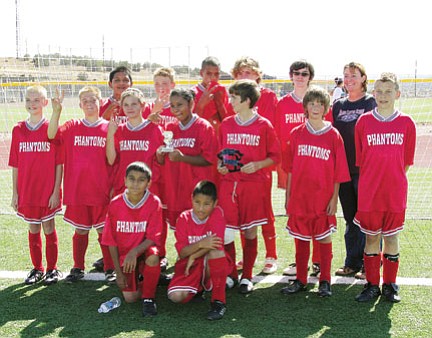 GRAND CANYON, Ariz. - The Grand Canyon's middle school Phantoms had a strong season this year following their display of prowess at a Sept. 26 tournament in Page. The team ended their regular season with a total of nine wins and three losses overall, placing the Phantoms at second in their division, according to officials at Grand Canyon School. The Phantoms played hard during a recent tournament in Page, with the team placing second overall. The Phantoms took on Ash Fork in the championship game, losing by a single goal at the end of the tourney.

Coach Joe Pennington had nothing but good things to say about the middle school soccer squad when it came to the recent soccer season.

"A most remarkable season was played by Grand Canyon's middle school soccer team," Pennington said. "Remarkable because of the number of wins and number of goals scored, but also remarkable because of the way the team came together during practices and exhibited incredible sportsmanship on the field during their dozen games. The eighth graders provided wonderful encouragement to the younger kids and everyone got to play. The development of the players' skills was marked during the season, such that even the sixth graders were displaying advanced Brazilian-style maneuvers the coaches taught them."

The Phantoms scored 53 goals in 12 games. Phantoms players who scored goals in the season include Ethan Berry with 19, Joey Bankston with 12, Jaru Velazquez with six, CJ Kern with five, Alex Thompson and Tateyonna Jeter with three each, Justin Jarell with two, and Miranda Boldosky, Tristan Martin and Nick Gomez with one apiece.