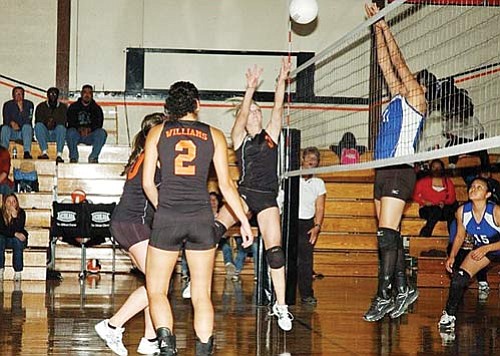 WILLIAMS - The Williams High School Lady Viking volleyball squad took on Grey Hills last week, coming out on top with scores of 25-20, 25-23 and 26-24. Grey Hills, seeded second behind the Lady Vikes in the 2A North division, gave the Vikes a real run for their money.

"We knew that Grey Hills was going to be competition. When we went into the game they were ranked fifth in the state. We knew we needed to win to keep our points high. They were close three matches. Our team really came together and played well," she said.

With some players benched due to practice absences, Keisha Reid, normally a setter, played the game as a starting outside hitter. Carter said Reid stepped up and played a solid game at a position she is not accustomed to. Carter also singled out Darrian Quasula for strong hitting throughout the match but emphasized that all of the Lady Vikes played well.

"That game against Grey Hills, everybody came to play and the Williams team played amazing and it showed," Carter said. "I mean with how well we performed and the fact that we won. It was a huge boost for us. We knew we needed to win and they were ranked pretty high in the 2A. It was a good game."

In their second game of the week, the Lady Vikes kept their momentum going with a win against Rough Rock in three sets, 25-7, 25-13 and 25-16. While Rough Rock did not pose much of a threat to the Vikes, according to Carter, the team kept their focus and dominated the match.

On Tuesday the Lady Vikes play their last game of the season in a home game against Seligman at 6 p.m. Carter said the Lady Vikes hope to place in the top eight teams in the 2A division assuring a high seed for the state finals. This Thursday the team plans to watch a Northern Arizona Volleyball game to see how teams at a higher level of play work together and focus.

"We know that at state that we're going to see teams that we've never played so we need to be prepared for anything and not get frustrated and down on ourselves," Carter said.