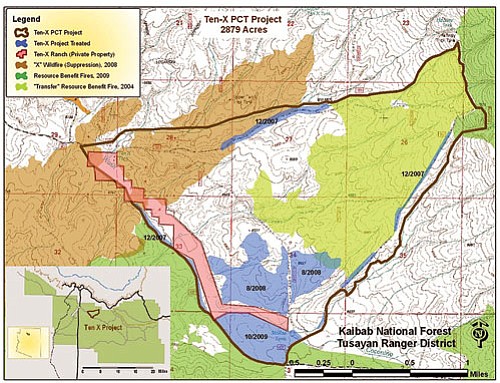 TUSAYAN, Ariz. - Officials with the Kaibab National Forest (KNF) plan to continue their first prescribed burn since the Williams Twin Fire this week. The prescribed Ten X fire is the first since KNF officials ignited their last burn on the Williams Ranger District earlier this month, which turned into a 921-acre wildfire that threatened the Williams community due to shifting winds in the area. The Ten X burn, located roughly four miles southeast of Tusayan, is a planned 2,000-acre prescribed burn on the Tusayan Ranger District. Fire managers started the burn Oct. 14, then stopped due to wind concerns in the area. The burn is slated to continue this week should weather conditions prove favorable.

According to KNF Fire Information Officer Punky Moore, smoke may be visible in the Tusayan area as a result of the prescribed burn. Smoke could be visible along Highway 64 and within the Grand Canyon National Park as well.

"We don't just look at the direction of the wind, but we also look at the dispersal and the ventilation that helps carry the smoke away from both Tusayan and the park," Moore said. "If we get the southwest winds, that would be good for smoke dispersal. Along with the wind we actually get a forecast for ventilation."

Moore said the North Kaibab Ranger District is also managed by officials under their own organization.

In the Williams Ranger District, no prescribed burns have occurred since the Twin Fire.

"Future burning will occur when it is appropriate," Moore added.

Originally begun as a prescribed burn on Oct. 1, the Williams Twin Fire quickly grew out of control as fire managers said a shift in wind patterns created a number of spot fires beyond the boundary of the prescribed burn area. Fire managers declared the burn a wildfire Oct. 2 and were forced to evacuate over 60 homes in the Williams area as the fire spread towards the city. Red Cross personnel set up an evacuation shelter at the Williams Elementary-Middle School and various businesses located within the evacuation area had to close their doors. Schools in Williams were also cancelled for one day due to the evacuation orders. Crews eventually contained the fire with no property damage or lives lost. Forest officials estimated that the fire was held at just under 1,000 acres.

Fire managers held a fire meeting Oct. 19 at the Maine Consolidated School in Parks to listen to the community's concerns when it comes to prescribed burns. Officials hope to do burns there in the future should favorable conditions in the weather allow it. One of the biggest questions for prescribed burns, particularly those near schools, is how the burn will affect the health of children who have asthma and other medical concerns, Moore said.

"There are a couple of projects out there that are scheduled, but we have to wait for the appropriate conditions to do that," Moore said.

Moore said the prescribed burn at Ten X went favorably during the first day on Oct. 14.

"It went very well. A lot of that was to reinforce the containment lines, which are basically roads and previously burned (areas) and to make sure that those are prepared before we do the internal burning," Moore said. "That's the rest of the project. Whenever the conditions are appropriate we'll go out and do more broadcast burning on the entire project."

Appropriate conditions, she added, come following approvals from the Arizona Department of Environmental Quality (ADEQ) and from continuous monitoring by fire managers within each district.

"If it doesn't look right, you need to look at another day and go over the process again," Moore said.

When appropriate conditions are noted, fire managers will continue the burn, targeting the eastern boundary of the proposed fire area, located along Forest Road 303.

"That would affect people either camping or traveling in that area," Moore said.