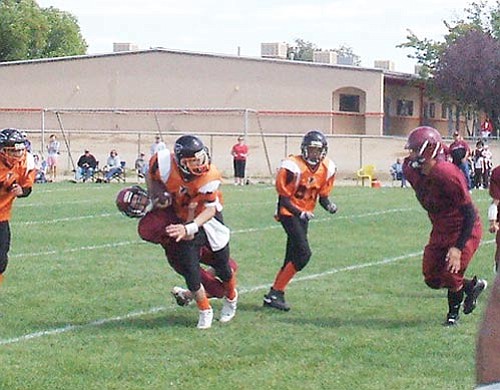 <br>Photo/Sharon Weems<br> Falcons drive the ball down field 80 yards to pull out a win against Heritage Middle School in the fourth quarter.

WILLIAMS - The Williams Elementary-Middle School Falcons ended their winning season on a high note, narrowly overtaking Chino Valley's Heritage Middle School on Saturday with a score of 20-18. Their third loss of the season came last week against Granite Mountain Middle School, who defeated the Falcs 36-16.

The Falcons played hard against Granite Mountain but were unable to overcome an opponent who fielded 49 players. Quarterback Kohl Nixon went 6 for 12 passing for 171 yards with one touchdown pass and two interceptions. He also ran the ball nine times for 102 yards and one touchdown. Other standouts on offense included Coty Baxter, who ran the ball 12 times for 123 yards and had one reception for a touchdown, and Jorge Davalos, who ran six times for 54 yards and had two receptions for a combined 76 yards.

In their win against Heritage, the Falcs found themselves behind 18-12 with four minutes remaining in the fourth quarter.

Coach Herman Nixon praised the offensive line for digging deep and putting points on the board late in the game.

"We had to drive the ball down the field 80 yards to score," Nixon said. "Our offensive line, Christian Plasencia, Alexis Soto, Jordan Brown, Kendall Brown and Andrew Payne, pushed back the defense allowing our quarterback and running backs the opportunity to move the ball down field with Kohl Nixon running 24 yards for a touchdown to tie the game."

The Falcons then scored a two point conversion to take the lead in the game. Nixon pitched to Coty Baxter, who threw to Nixon in the end zone to score with two minutes left in the game.

Nixon said the Falcs' defense did an excellent job of keeping the team on top with solid play in the final seconds of the game.

"Our defense came up big in the game when Chino had the ball on the two yard line with 13 seconds left in the game and we stopped their scoring attempt to secure the win," he said.

The Falcons will not compete in post season play this year. Due to three teams being tied for third and fourth place in the division, the Falcons have been knocked out of bowl play.

Nixon said the Falcons' coaching staff is pleased with how the team played during the season.

"The coaches are very proud of this team and the young men who worked so hard this season to produce a winning season for the Falcons," he said. "We only had four returning starters from last year's team and we were made up of mostly first year players, yet we took third place in a very tough division."