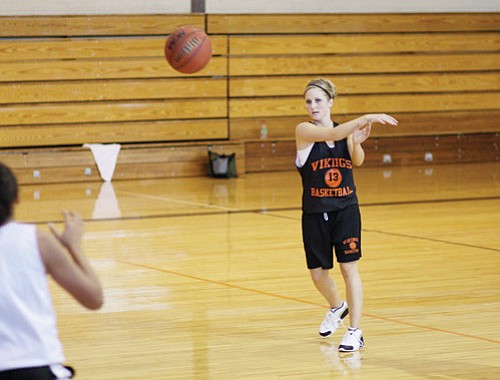 WILLIAMS - The Vikings Boys and Girls basketball teams scrimmaged against Mayer last week in preparation for the start of the regular season Tuesday.

"We've only put in two offensive schemes, but we practiced six during the scrimmage just to see if they could figure it out on the court. Same with defense, we've only practiced two but we ran through full court press, half court press just to see how they would handle it and it went very well," he said.

They boys squad has a total of 29 players with 12 on the varsity team.

Heisley said it's hard to know what to expect in their upcoming game on Tuesday against Seligman, a Division 1A team.

"They've been really good in the past. Our boys tend to play up or down to the team's level that they're playing," Heisley said.

Both the Vikes boys and girls teams will begin the tournament facing off against Baghdad.

Varsity Girls head coach Phillip Echeverria said the girls team is coming together even with the introduction of a new offensive strategy.

"The scrimmage went well. It brought to light a lot of areas we need improvement on, which that's what the scrimmage is for," he said. "For us, having a new man offense, we struggled getting into our offense and the flow of that. I was real proud of the way the girls hustled and played hard. Most of our points came off turnovers. We pressed for three of the five quarters that we played."

Nine girls played in the scrimmage against Mayer that Echeverria called a very physical game.

Echeverria said the girls team will work on transitioning from offense to defense and stopping the ball in the four practices before their season opener at home against Seligman Tuesday at 5 p.m.

Both the boys and girls JV squads will travel to Tri City Prep for their first game of the season. Echeverria plans to send nine girls to the away game, keeping the remaining nine varsity girls at home. With a total of 18 girls in the program, the split games create difficulties for the girls team.

"It will be pretty tight when we split up like that," Echeverria said. "Generally, I'll have most of the underclassman play the JV games and then come up and play the varsity games. Play both for us."

Echeverria said that although no score is kept during scrimmages, the girls put a lot of points on the board against Mayer. He went on to say that the girls are defensively sound and understanding what needs to be done offensively.

Friday Jan. 8, the Vikings will take on Valley-Sanders as part of a Phoenix Suns promotional game. The Vikes will travel to play before the Suns-Miami Heat game in U.S. Airways Arena.

"It's an outstanding opportunity for the boys and girls to play in a venue of that stature," Echeverria said. "Sometimes you get to the state playoffs and get to play in that type of a venue, sometimes you don't. We're hoping to get the support of the community to purchase tickets to the game."