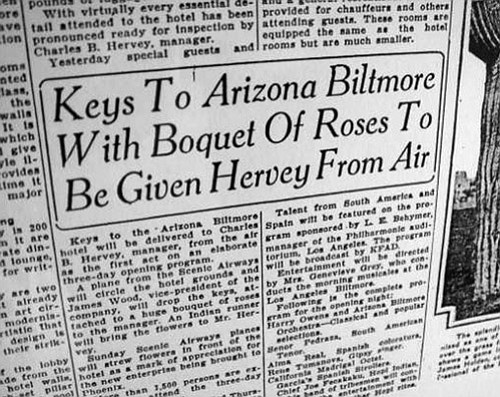 <br>Submitted photo<br> A 1929 newspaper article on the original grand opening of the Arizona Biltmore.

PHOENIX, Ariz. - Valle Airport's famous Ford Tri-Motor took part in an historic event last month when it flew to the Arizona Biltmore in Phoenix as part of the establishment's 80th birthday celebration. The plane re-enacted the hotel's 1929 Grand Opening celebration, in which the original occupants of the plane dropped rose petals and a large wooden key over the property. Mike McComb, chief pilot for Grand Canyon Airlines, piloted the craft during the Oct. 22 re-enactment. John Dillon, manager of the Western Heritage Museum in Tusayan, served as co-pilot for the recent flight over the Biltmore. Dillon is also manager for the Ford Tri-Motor, a part of John Siebold's Valle Airport collection.

"It was fun to recreate the event for the Biltmore property and have Grand Canyon Airlines, or Scenic Airways, represented with the Ford, which is of course Valle Airport's Ford. Valle Airport owns it. Mr. Siebold allowed us to take it down there and do that," Dillon said. "This particular Ford Tri-Motor also turned 80-years-old in September. Sept. 4, 1929 was it's first flight."

Officials with Biltmore, interested in the idea of recreating their grand opening event, contacted Dillon about the idea - an idea that quickly took flight for those involved.

"In 1929 when the Biltmore opened, they requested that Scenic Airways, which is now Grand Canyon Airlines, fly their Ford Tri-Motor over the property and drop some rose petals and drop a key. It's about a two and a half foot wooden key that says 'Grand Opening Scenic Airways.' And so they flew the airplane down low and they circled the property," Dillon said. "It was a big event for the property down there. That was 80 years ago. We staged out of Deer Valley. The original, obviously, was staged out of Sky Harbor, which was also built by Scenic Airways, by Grand Canyon Airlines. Grand Canyon Airlines built Sky Harbor Airport in November 1928. Its first flight out of Sky Harbor, Nov. 18, was also in a Ford Tri-Motor. All this stuff was kind of happening right there in the late 1920s."

For the 80th anniversary it was decided not to drop the key, due to newer aviation laws and fear of property damage.

"The rules today are quite different. You can't fly lower than 1,000 feet above ground level in a congested area," Dillon said. "I don't think I would have been able to hit the seventh fairway, let alone the lawn. Because we didn't want to put the key into the windshield of a Lexus of a guest that was there, we decided that was a bad idea. What we did was we took the key replica (they have the original key in a glass case) and flew over and pretended like we were going to drop it. Then we landed and they drove it over to the property. Then we took off again and flew over the property and we did a simulation like we dropped it and then they handed it to the general manager on the lawn. They had about 500 people there, guests and employees. It was kind of a conglomeration project between Valle Airport and the Biltmore. It was a lot of fun."

The Arizona Biltmore is well known throughout the state for its lavish amenities and Frank Lloyd Wright-influenced design. Called the "Jewel of the Desert," the hotel has hosted celebrities, politicians and more throughout its 80 years of existence. More on the hotel can be found online at www.arizonabiltmore.com.