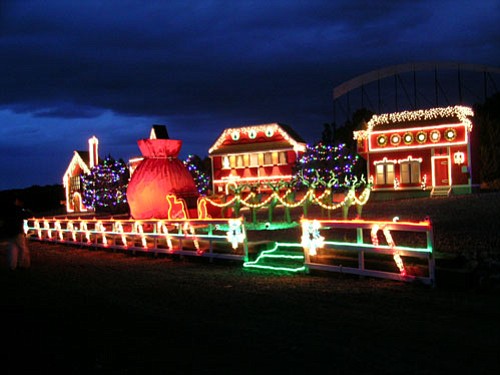 <br>Submitted photo<br> Record numbers are expected for the 2009-2010 season of the Grand Canyon Railway's popular train ride to the North Pole, pictured above and below.

WILLIAMS - Children grow up writing letters to Santa Claus and imagining what his workshop must look like. Most never dream that one day they might have the opportunity to hop a train straight to the North Pole.

This year's Polar Express began transporting children of all ages to the North Pole last Friday and will continue through Jan. 9.

Steven Martin, Public Relations Manager for the Grand Canyon Railway, said close to 70,000 tickets have been sold so far this year with the Railway expecting to sell at least 75,000.

Even with the economy struggling to right itself, Martin said sales are topping last year's numbers likely due to the popularity of the attraction.

"To many families, it's the official start of their holiday season. For others, it's a great way for mothers and fathers to bond with their children and share the magic and spirit of Christmas," Martin said.

"Because the Grand Canyon Railway's version of the Polar Express continues to grow in popularity, we have added dates and train cars to the Polar Express Train for 2009," she said. "If guests can be flexible with their dates and visit mid-week, there are still hotel rooms and train seats available. In addition, there are still plenty of rooms and seats available on this year's new Christmas Eve Limited."

The Polar Express kicked off its season with the annual Charity Ride. The Railway has invited not-for-profit organizations such as Big Brothers Big Sisters of Flagstaff and Williams Head Start to ride the train for the past nine years. This will be the third year tickets have been set aside for organizations from across all of Arizona. According to Martin, more than 1,700 tickets were distributed to charities and not-for-profit organizations, the most the Railway has ever awarded.

Organizations submitted applications during the month of September. Each group provided information about its mission, the people it serves and why it merited tickets aboard the charity train.

During the off-season, the year's Polar Express underwent a makeover with upgrades to Santa's Village among many other presentational changes.

"Returning visitors will be pleased with big changes we are making to the village," said Gordon Taylor, regional general manager of Xanterra Parks Resorts. "In addition to the lighting we have displayed through the years, the village will feature storefronts, mailboxes and other features to give it a more permanent and three-dimensional look and feel."

Closely following The Polar Express book by Chris Van Allsburg, the nighttime trip from the Grand Canyon Railway depot in Williams through 12 miles of wilderness to the "North Pole" features a special reading of The Polar Express while passengers enjoy hot chocolate and chocolate chip cookies. After arriving at the "North Pole" - a Christmas light village featuring an "Aurora Borealis" - Santa Claus and his reindeer welcome passengers before Santa boards the Polar Express for the return trip to Williams. Santa makes his way through the historic Pullman passenger cars, greeting every child and presenting each one with a special gift - a jingle bell signifying their belief in Santa Claus. The round trip journey is a little more than an hour in length.

In the nine years that the Grand Canyon Railway has offered the Polar Express trips, approximately 359,000 people have visited Williams to ride the train.

Polar Express reservations can be made by calling 1-800-THE-TRAIN or by visiting www.thetrain.com.