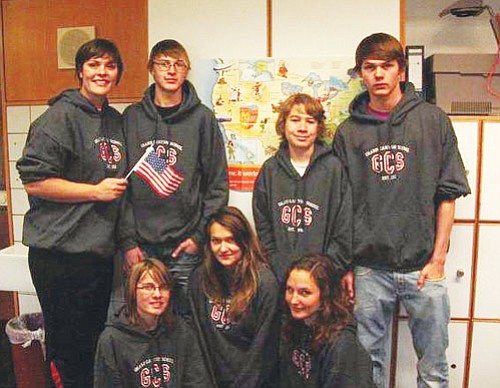 <br>Submitted photo<br> The German students, along with their teacher Kristina Gotthardt, show off their Grand Canyon sweaters.

GRAND CANYON, Ariz. - Six students made their first trip to America recently when they visited Grand Canyon as part of a student exchange program coordinated by Grand Canyon School teacher Lori Rommel. The visiting students spent a week in the area, visiting a number of northern Arizona landmarks, and, while the students were impressed by the school upon their visit, so, too, were teachers and staff at the school impressed with the German students.

"The students have been saying things like, 'Everybody here is so nice, the campus is so clean, P.E. (physical education) is so hard.' They're from near Bunda. It pretty rural. They're not from the big city at all, so this was kind of a good fit for them," Rommel said. Rommel teaches middle school language arts, for grades sixth, seventh and eighth.

Both Rommel and German teacher Kristina Gotthardt facilitated the visit. The two met in the summer of 2004, when Rommel worked near Moab as a river guide.

That letter-writing project, she explained, soon led to the idea that the German students should visit Grand Canyon.

"They made it happen," Rommel said. "This is kind of like their version of the American dream."

It took roughly a year to coordinate the trip, she added, but the end result brought the six students to the area for a one-week period.

"It's the first time they've been to America," Rommel said. "I had to find host families and set up a schedule and an itinerary. I didn't have time to do fundraising. I had to look for some money to pay for certain things, but it's been really cool. They spent two full days at the school paired up with their host family student and had an amazing couple of days."

The German students took part in air tours, trips to Cameron, jeep tours in Sedona and other programs. The students also visited the lava tubes, Lowell Observatory and the mall in Flagstaff during their stay. On their last day, the visiting students were treated to a number of locales in Phoenix before boarding the plane back to Germany.

Rommel thanked officials with Grand Canyon School for their help in accommodating the students.

"The host families have been just wonderful," Rommel said.

Rommel also thanked Julie Aldaz at the Red Feather Lodge for donating three rooms to the group when they arrived to the Canyon area and Café Tusayan for providing a brunch for the group as they met their host families.

"When they came we didn't have to do the introduction to their host families at 3:30 in the morning," Rommel said.

According to Gotthardt, the students studied American culture and hoped to explore the country first hand.

"In class they have been talking about American history, geography and culture. Grand Canyon is the perfect place to explore this concept," Gotthardt said. "We are so thankful for having been able to turn our dream into reality."