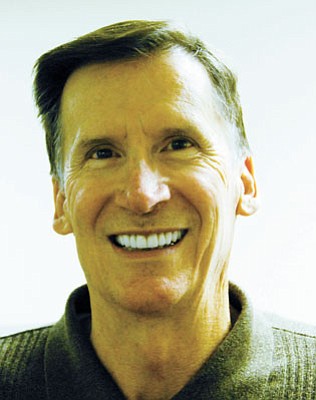 WILLIAMS - City Manager Dennis Wells announced that he plans to retire Friday after eight years in the position. Wells announced his retirement Nov. 17. The announcement followed on the heels of a Nov. 12 executive session held near the end of their regularly scheduled meeting. Executive sessions are typically closed to the public, particularly in relation to personnel matters. In the Nov. 12 meeting, council members mysteriously voted to take action in relation to the executive session, but did not explain to the public what they were voting on.

"I am announcing my retirement effective as of next week," Wells said. "I will also be on an on call basis with the city of Williams to provide consulting services on important matters, particularly at the state level, Hoover Dam power re-allocation, and perhaps water meetings. I do have a geology degree and really love the water area, so I am excited about the possibilities there."

"As far as my plans go, I plan to take a break first of all. I'm ready to take that break," Wells said. "I've already had some interest as far as employment goes, so I'm ready to take a break and move forward. It's my belief that this last eight year period was one of the most productive and progressive periods in the history of the town, because of the number of infrastructure projects that we built, the progress that we provided in our streets, our wastewater treatment plant, our water plant, repaving a number of very important roads and I don't want to forget about the new Gateway structure. That was my baby from the start. The Gateway structure, I think, is becoming an icon symbol of Williams and we finally have our trademarked logo up there - Gateway to the Grand Canyon. I'm extremely proud of that Gateway structure and the way that Al Richmond and Mike Christman, and city staff and APS (Arizona Public Service) helped put that together. I had a lot of people think that I was a little touched in the head for saying that we could get this thing built and done, but there it is today."

Wells counted these accomplishments as something he would be proud of for years to come and said he has taken the position of city manager to the point that he could.

"I'm looking forward to seeing Williams progress into the future. I do plan to be in Williams personally and professionally in the future," Wells said. "I do have land holdings here, and a house, so I'm going to be around and involved in the progress of this town."

When it comes to his retirement, Wells said there was no animosity or ill feelings between him and members of Williams City Council.

"I want to make that very clear," Wells said. "I think the city council was ready to make a change and I was fine with that as well. I have been considering retiring from this post for about six months to a year now. I've been treated very fairly and I'm happy with the treatment that I've had here."

Williams Mayor John Moore commended Wells for his accomplishments for the city during tenure as city manager.

"Given his service to the city of Williams for a little over eight years, he's done a lot of good things," Moore said.

There has been no official word on plans to replace Wells following his last day on Friday.

"That will be a council decision. We'll discuss that at a later date," Moore said. "We do have a couple of good people in Joe Duffy and Susan Kerley to help us with staff supervision at this time."

It has been a turbulent month for the city of Williams. Officials recently voted to approve a number of cuts during their regular meeting Oct. 8. Reduction measures included the loss of three full-time city employees, layoffs for a number of part-time employees, and a five percent salary reduction for all city administrators. City council members also took a $200 monthly cut from their $400 monthly stipend.

Gateway structure on the road to completion
2009 Williams Year in Review: Part III
Shaping up to be a big Fourth celebration
City to install second gateway arch at east end of Route 66
Fireworks, communication and more for city officials
Event Calendar