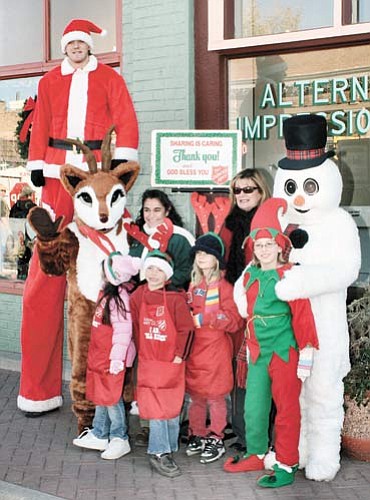 <br>Photo/WGCN<br> Bell ringer volunteers help to collect donations to the Salvation Army's Red Kettle program. The program helps those in emergency situations during the holiday season.

WILLIAMS - Holiday shopping goes hand in hand with the sound of bells ringing. Why? Because that's when Salvation Army volunteers take to the streets asking for donations to assist people in need.

The bell ringers are part of the Salvation Army's Red Kettle campaign, the oldest annual charitable fundraiser of its kind in the United States. Carol Glassburn heads up the effort in Williams.

Bell ringers will be asking for the public's help in raising money to provide toys for needy children, coats for the homeless, food for the hungry and people in emergency situations beginning Nov. 27 through Dec. 20.

Glassburn said volunteers will be posted in front of National Bank, Safeway and the Polar Express.

"We ring the bells Friday, Saturday and Sunday at Safeway and Friday at National Bank. And then intermittently during the Polar Express," she said. "It takes about 50 volunteers throughout the season to keep it going."

Volunteer shifts are generally between one and two hours. Glassburn said she is actively looking for individuals to donate their time to the cause. Bell ringers are stationed indoors at Safeway and National Bank. Not so at the Polar Express. Glassburn will need folks with warm jackets for that particular location.

"The Polar Express is outside. It's cold. It's cold," said Glassburn.

The red Christmas kettles originated in San Francisco in 1891 when a Salvation Army Captain resolved to feed a Christmas meal to the city's poor population. In order to gather funds to help provide the meal, the Captain placed a large pot at the Oakland ferry landing.

The kettles soon caught on as a method to collect donations. By 1895, 30 kettles were placed at various Salvation Army locations up and down the west coast. Today, the kettles are used worldwide.

In addition to bell ringing locations, Red Kettles will be placed inside Colors of the West, Pine Country, Denny's and Rosa's Cantina. Red kettles are available to any interested businesses.