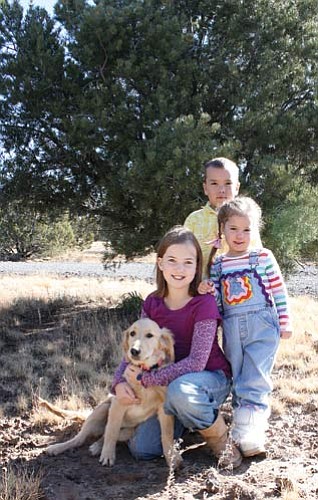 <br>Ryan Williams/WGCN<br> Bailee, Cole and Elly Cameron with their new Golden Retriever named Abby. The Humane Society, with the help of local Gail Cook, united the family with the 14-week-old dog following the loss of their family pet.

WILLIAMS - It's always a tragedy when a family's dog is hit by a car. But for one local family, local residents and area animal organizations softened the blow.

While Brooks and Melissa Cameron's three young children, Bailee, Cole and Elly, played in the trees just off the road near their home about three weeks ago, their family dog, Ruby, was hit by a car. Melissa Cameron said she and her children found the dog shortly after the accident.

"The kids didn't see the dog get run over," Cameron said. "I was right there with them when we found her. Whoever did it didn't stop. The first person by was Gail and her husband. We were all pretty sad."

Gail Cook is an Animal Management Officer. She and her husband Dan saw the Camerons on the side of the road and pulled over to help.

"We stopped and pulled the dog off the road and offered to help and they were just so traumatized, so I told the mom that I'm an off duty animal control officer for that area but that when they were ready I'd look for another dog for them," Cook said.

The next morning, Cook went to the Coconino County Humane Society and explained what had happened. As it turned out, the Humane Society happened to have a 14-week-old, purebred Golden Retriever at the shelter in need of a home.

Cook didn't know the Cameron's name or their phone number so she stopped by a neighbor's house the next day and asked for the Cameron's phone number. She called the family and brought the new dog, named Abby, over later that night.

Cameron said she had mixed feelings about getting a new dog so soon after the accident, but that her two girls, Bailee and Elly, were very excited. Her son Cole took a bit longer to warm up to their new pet.

"She's a great dog. The kids really like her. They've taught her to sit and are enjoying her. My son, he just loves his dogs. He took the accident hard," she said. "It really did help the kids. There are times when they still miss Ruby, but it's been amazing."

The Humane Society gave the dog to the Cameron family, waiving adoption fees. Dr. Westover at Aspen Veterinary Clinic provided the spay of the dog free of charge.

"It turned out great," Cook said. "It was just like an early Christmas."