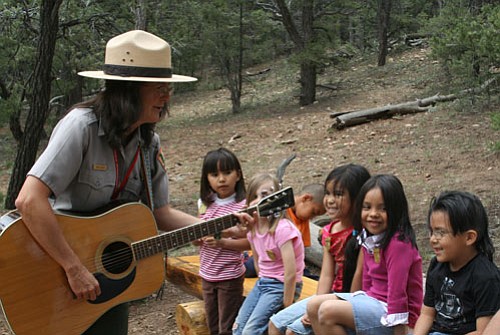 They might live and go to school in a national park, but Grand Canyon kindergartners still found it a treat to be sworn in as Junior Rangers last Thursday in a ceremony in the school's outdoor classroom.

Ranger SuZan Pearce led the students in the Junior Ranger pledge culminating a unit that explored a sense of place and what makes locations special.

"We live in a special place," said elementary teacher Kelley Ingols, who worked with the park's interpretive staff to bring the popular program for visitors into the classroom. "A lot of kids don't partake of the Junior Ranger program, even though we live in a national park."

As youngsters explored their own backyard through activities in the Junior Ranger book and supplemental material for the classroom, they also discussed why Grand Canyon and other national parks are special to people all over the world.

"We talked about why national parks are special places, why they're important to people personally, or to a community or to the world," said Pearce. "It's a special situation here and we want to emphasize that."

The kindergarteners were sworn in as Ravens, the first of three levels offered in the Junior Ranger book and geared to ages four-seven, after completing four tasks. The other levels are coyote for ages eight-10 and scorpion for 11 and up, as well as a special Phantom Rattler level for those who attend the program at Phantom Ranch. Their pledge included a commitment to care for national parks and to tell others about them.

So far, they have developed lessons for Grand Canyon's kindergarteners through seventh grade. Topics include how animals use their senses to survive, how plants survive, water conservation, ecology, energy and resource conservation, hiking safety and anatomy and physiology and historic Grand Canyon Village and fire ecology.

"My supervisor asked us to work with each teacher to develop a program using resources at Grand Canyon," she said. "It's important to have a ranger in the classroom, for children to talk with a ranger, interact with a ranger, learn what rangers do."

The goal was to create programs that align with both state standards and those related to International Baccalaureate.

"We want to create resources that teachers could use without adding extra workload," she said.