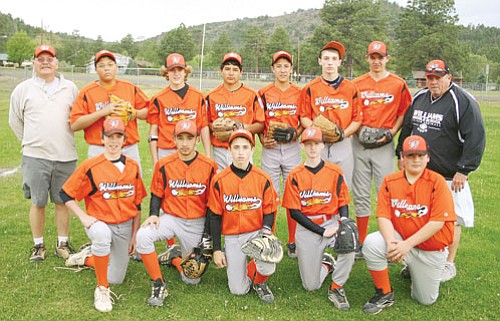 WILLIAMS - The Williams Juniors team, playing in the Flagstaff Little League division, continued a strong season recently as they played a number of games against teams from Flagstaff and Winslow. As of May 16, the Juniors carried a record of eight wins and one loss.

The team played the Continental Red Sox May 8 in Flagstaff, taking the win in the game with a final score of Williams 12, Red Sox 5. Juniors pitcher Kohl Nixon pitched a total of five innings for the Williams team, bringing in eight strikeouts in the game. Nixon brought his record to 3 and 0 for the season following the Red Sox game. Relief pitcher Jimmy Perkins took over in the sixth inning of play to ensure the Williams win, while hitters Coty Baxter, Adrian Solano, Jorge Davalos and Blaine Mitchell were all three for four at the plate.

The Juniors held their winning streak when they took on the Flagstaff Phillies May 11, winning the game with a final score of Juniors 5, Phillies 4. Williams pitchers Jimmy Perkins and Joaquin Salaz held the hard-hitting Flagstaff boys to four runs in the game. Nixon came through for Williams in the fourth inning of play, as Williams was down 2-1, when he hit a two-run homer that put Williams up 4-1. While the Phillies managed to come back to tie the game in the fifth inning of play, a single by Williams player Kenneth Barker brought in Junior Joaquin Salaz from third base, to win the game for Williams.

The Williams Juniors went on to win another one May 15 after taking on the Continental Rays. The Juniors took the win in the game with a final score of Williams 12, Rays 4, thanks to a number of strong hits by players Adrian Solano, Kohl Nixon, Coty Baxter, Joaquin Salaz and Jorge Davalos. Nixon improved his pitching record in the game to 4 and 0 as of May 15.

The Williams team went on to play a double-header May 16 in Williams against a tough group of adversaries out of Winslow. The first game of the double-header served Williams their first loss for the season. Winslow took the win with a final score of Winslow 10, Williams 8. Despite the loss, Juniors Coach Herman Nixon said the players put their all into the first game.

"This was a hard fought game for Williams, who faced a hard throwing pitcher from Winslow who pitched for Winslow's varsity high school baseball team this season," Nixon said. "Williams pitchers Jake Harner and Adrian Solano did a great job keeping the game close."

Things improved for the Williams boys by the second match of the May 16 double-header, with Williams taking a strong 13-7 win. Both Salaz and Perkins are credited for keeping Winslow off balance in the game.

"I was very proud of this group of young men who, after losing their first game of the season, bounced back and won the second game of the double-header," Nixon said. "Winslow is a tough team, with several high school varsity players that didn't intimidate our boys. They just shrugged off the loss and came back with a vengeance and took it to Winslow."

The Juniors brought their record to 9 and 0 after they took on the Flagstaff Angels May 18 on the fields of Williams High School. Nixon brought his Juniors pitching record to 5-0 for the season following the recent win, with pitcher Joaquin Salaz securing the Williams victory to end the game. The Juniors took the win with a final score of Williams 8, Angels 4. Junior Adrian Solano went three for three at the plate in the May 18 game, with Coty Baxter, Nixon, Jorge Davalos, Salaz and Ethan Berry all two for three.

"These young men are playing great baseball," Nixon said. "They will need to continue to improve to get ready for the All-Star Tournament, which starts June 22 when Williams plays the Prescott All-Stars in Prescott."