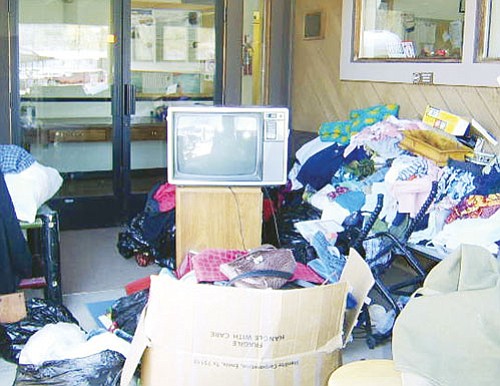 <br>Photo/Max Bishop<br> Unusable ‘donations’ outside the front door of the Williams Senior Center.

WILLIAMS - It can be difficult to get to the front door of the Williams Senior Center some mornings, thanks to large piles of discarded clothing and merchandise left there during the evening hours when the center is closed. Much of the merchandise, according to Senior Center Coordinator Max Bishop, is unusable for one reason or another and typically blocks the way to the facility's entrance. Stained, torn mattresses, broken chairs and other items can typically be found on any given Monday morning, as well as other mornings. Many of the "donations," Bishop said, consist of more trash than usable donations, which can often take 15 minutes or more to clear from the entrance to the building.

"We have a problem. It's two fold," Bishop said. "One, our hours are 8 a.m. to 5 p.m. They're coming after hours (and) dropping off large items that we can't use at the center. They're just using the center's premises as a garbage dump - old refrigerators, air conditioners. It's creating a health and safety issue, number one, and then we have to dispose of it. People drop by and drop off nice items and people are pilfering these items at night, so we've got two different problems."

While the Senior Center welcomes donated items, Bishop said those items should be cleared with center personnel prior to being left.

"The items donated to the thrift shop, the proceeds are used for the Bill Williams Seniors activities and their charitable giving," Bishop said. "Small appliances, like small TVs, radios, wheelchairs, crutches, we really enjoy bringing in used clothing, for dispersal to the children in the community. Clothing is the biggest and it is what we really appreciate. What we're trying to do, especially for the clothing, is have a Goodwill-type repository, where people can't get into it and where people can drop off things after hours."

Bishop said that, 50 percent of the time, donations are made to the center during normal business hours. The other 50 percent, he added, drop off donations at nights and on weekends. Those donations, he said, include most of the unusable items that Senior Center employees have to dispose of.

According to Williams Police Chief Herman Nixon, anyone found illegally dumping at the Senior Center could face stiff fines. He suggested people who wish to donate do so during regular business hours.

"We're trying to keep an eye on it and we're working with the city," Nixon said. "Cameras have been put in place and we'll be putting a large sign out there. If we catch somebody putting something there once the signs are there, we're going to prosecute them for illegal dumping. Littering is a Class 1 misdemeanor. It's stiff fine."

Williams City Manager Dennis Wells said city officials are keeping an eye on the situation at the Senior Center.

"We're installing surveillance cameras to monitor the activity outside the building. We have had problems with items being left there under the guise of donations that basically have no value and should have been taken to the landfill,"

Wells said the problem has been an ongoing one for a couple of years.

"We had a couple of burned out heaters, which basically don't work. They need to go to the landfill. Used, old mattress, they really have no value to anyone and legally cannot be used," Wells said. "It's not to say that good, legitimate donations have not been received. They certainly have been."

Wells said he recommends that people donate during the center's business hours and speak to an employee before dropping off any donations.