Is Williams ready for swine flu?
No current cases reported in county 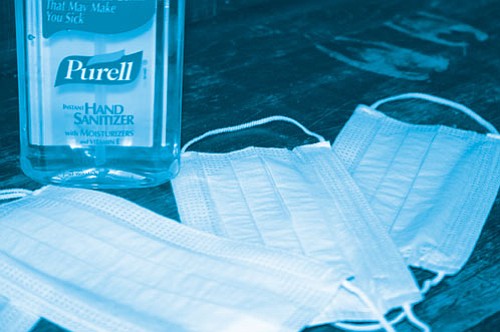 <br>Patrick Whitehurst/WGCN<br> Officials at the Williams Banner Health Care Center said they are prepared for a possible swine flu outbreak in the Williams area.

WILLIAMS - Despite reports of a "probable" case of the H1N1 virus, commonly known as swine flu, Coconino County officials now say those results have come back negative.

Health officials with the Center for Disease Control (CDC) recently reported that samples taken from an ill Northern Arizona University (NAU) student, initially thought to have contracted swine flu, did not test positive for the H1N1 virus.

Meanwhile, health officials in Williams said they are ready to treat the swine flu should it surface locally. According to a May 2 Arizona Department of Health Services (ADH) report, 13 new cases of the H1N1 virus have been identified in the state of Arizona, which brings the total number of influenza cases to 17 in four counties.

"We are partnering with the Coconino County Health Department," Christman said. "We get daily updates and communications through them and, I think, they get their information from the CDC Web site. We're doing surveillance and collecting data for them. That means that when patients come in, we have a special screening questionnaire that we go through with the patients and then, based on that information, we have an influenza quick test that we perform. Depending on that quick test, if we have to do an actual swab for swine flu, then we do the swab."

Preparations for a possible outbreak of swine flu in the area, she said, include "typical" flu procedures, coordinating efforts with law enforcement, fire, schools and emergency medical services. Officials at the health care center will also screen patients that may be exhibiting flu-like symptoms. Part of that screening process includes questions about where the patient has traveled recently, Christman said. Patients who are exhibiting flu-like symptoms will also be asked to wear a mask. Masks, gloves and anti-viral medication, to be used only for treatment, arrived in Williams May 1 from the National Stockpile, Christman said.

"We're doing a lot of education with the staff. We have daily updates and communication and we have information available here for the patients, which helps them determine if it's the cold or the flu," Christman said.

While flu is around all the time, Christman said anyone exhibiting flu-like symptoms should monitor their conditions.

"Use good hand washing techniques," Christman said. " If they do have a fever, headache, if they've traveled to an affected area, if they've got some chest discomfort, sore throat, they should come in and be seen. We do have a plan in place to bring in more staff if available."

Schools in the area are also being closely monitored by both school and health officials, Christman said.

"We're in close contact with the (WEMS) school nurse," Christman said. "She has a screening technique she is also using."

Symptoms for swine flu are similar to the symptoms of the regular flu, which includes fever, cough, body pains, chills, fatigue and sore throat. According to reports, some people who have recovered from the swine flu reported diarrhea and vomiting. Health officials in Coconino County advise anyone who has developed an influenza-like illness to stay at home, get plenty of rest and drink plenty of fluids. Those who wish to seek medical care are asked to call their doctor's office or use other means prior to seeking care at a hospital, doctor's office or clinic. Those with severe symptoms, however, should seek immediate medical attention. Severe symptoms include difficulty breathing, shortness of breath, pain or pressure in the chest or abdomen, sudden dizziness, confusion, and severe or persistent vomiting, among other symptoms. Warning signs in children include fast breathing or trouble with breathing, bluish skin color, not drinking enough fluids, not waking up or not interacting, not drinking enough fluids, fever with a rash, not wanting to be held, and flu-like symptoms that improve but soon return with fever and a worse cough.

Officials with the Coconino County Health Department recommended a number of preventative measures to help stay healthy. Preventative measures include avoiding close contact with sick people, staying home from work if you are sick, avoid touching your eyes, nose or mouth, washing your hands often, and covering your mouth with a tissue when you cough or sneeze.