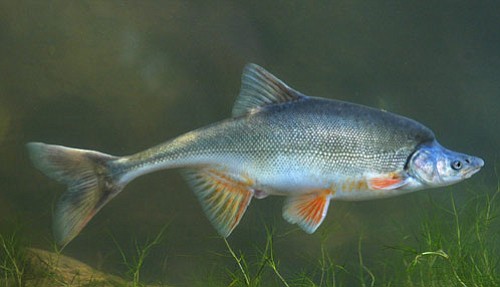 FLAGSTAFF, Ariz. - Adult endangered humpback chub increased by about 50 percent in Grand Canyon between 2001 and 2008, according to recent analysis by the U.S. Geological Survey. The upward trend reverses declines from 1989 to 2001.

The humpback chub is a freshwater fish that may live up to 40 years and is found only in the Colorado River Basin. It was placed on the federal list of endangered species on March 11, 1967. Only six populations of humpback chub are known to exist, five above Lees Ferry and one in Grand Canyon.

"USGS scientists and their cooperators are actively pursuing research that will increase our understanding of why native fish populations are increasing," said Matthew Andersen, USGS supervisory biologist. "Experimental flows from Glen Canyon Dam and above average water temperatures as the result of drought conditions may have supported native fish. Removal of some nonnative fish species in select locations may also have helped."

It is not easy to determine what is causing the rebound because several natural and human-caused changes have taken place between 2000 and 2008:

• Experimental removal of 80 percent of rainbow and brown trout from the confluence of the Colorado and Little Colorado rivers. Trout are thought to prey on young fish and compete for food.

• Drought-induced warming since 2003 has raised river temperatures to a more favorable range for native fishes to reproduce. Humpback chub require a minimum of about 61 degrees. In 2005, temperatures near the Little Colorado River exceeded 62.6 degrees, the warmest recorded there since the reservoir filled in 1980.

• A series of experimental releases from Glen Canyon between 2000-2008 also helped raise water temperatures. Chub hatched in 1999 may have prospered from in-stream warming resulting from the 2000 low summer steady flow experiment. As a result, peak water temperatures in lower sections of Grand Canyon reached almost 69 degrees in the summer of 2000, compared with the typical peak of 59-64 degrees.

Unlike elsewhere in the Colorado River Basin, Grand Canyon native fish populations have experienced recent improvements. In addition to humpback chub, the flannelmouth sucker and bluehead sucker are stable and appear to have increased in the reach upstream and downstream from the mouth of the Little Colorado River. In this area, scientists have found juvenile and adult fish of both species, suggesting that more successful reproduction is occurring.

The likely factors that contributed to the historical decline of Grand Canyon native fish include changes in flow and reduced water temperature resulting from the regulation of the Colorado River by Glen Canyon Dam, the weakening of young fish by the nonnative parasites such as Asian tapeworm, and competition with and predation by nonnative fish species.

The USGS Southwest Biological Science Center's Grand Canyon Monitoring and Research Center (GCMRC) is responsible for the synthesis and analysis of fish data collected by a number of cooperating entities, including U.S. Fish and Wildlife Service and Arizona Game and Fish Department. These activities are undertaken as part of the Glen Canyon Dam Adaptive Management Program, which is administered by the U.S. Department of the Interior.