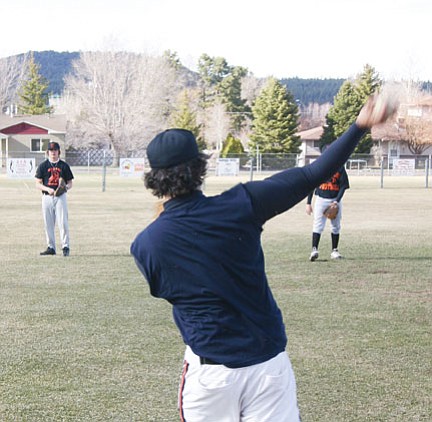 <br>Patrick Whitehurst/WGCN<br> The Williams High School Vikings current record is 4 and 0 in their region and 8 and 4 overall.

The Williams High School Vikings baseball team played a couple of games recently, challenging Northland Preparatory Academy March 24 and Ash Fork March 28. In the first match the boys took a strong win, according to Coach Phillip Echeverria. The Vikes took the win in the game with a final score of Williams 13, Northland Prep 0.

The Vikes traveled for a game against Ash Fork March 28 for both varsity and junior varsity games. The Vikes won the game with a final score of Williams 25, Ash Fork 6.

"The JV (junior varsity) won 25-3," Echeverria said. "In both ball games we came out swinging the bat well and hit the ball hard. The varsity had 25 hits in their game and five home runs. The JV team had three home runs. They're getting close to where we want to be, staying inside the baseball, driving it up the middle and hitting it hard. I'm real happy with that success. Some kids have made some changes and it shows. We've got to keep working on that."

"They cancelled their games against us, stating they didn't have enough kids to come and play us," Echeverria said.

The Vikings overall record is 8 and 4. They're currently 4 and 0 for the region.

"We continue to make progress at the plate with the batting, every game the confidence level increases with the hitting. We have a strong pitching staff and infield with limited errors. We're still working on the base running and outfield," said Coach Frank Schulte.