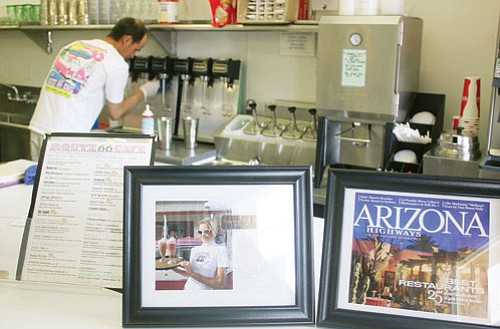 WILLIAMS - Twisters 50s Soda Fountain and the Route 66 Café was named one of this year's top 25 best places to eat in the April, 2009, edition of Arizona Highways, marking the second time a Williams restaurant has made the list for two years in a row. Red Raven restaurant was named to the top 25 in 2008. Twisters, located at 417 E. Route 66, offers a number of desserts and 50s style food, including flame-broiled hamburgers, hot dogs and other offerings. Jason and Stefanie Moore have owned Twisters for the last three years.

"It is a great honor and I think it's great that two restaurants in a small town like Williams have both been chosen two consecutive years in a row," said Jason Moore.

He said he had no idea that a critic would be arriving at Twisters for the prestigious magazine.

"We had no clue. Apparently they send out a food critic and that would have been some time last year. Apparently they judge on the cleanliness, service and the food served at the restaurant. They judge on those three criteria," Moore said, adding that he has always prided his business on providing great food and great service to his patrons.

Twisters restaurant is currently open Monday through Saturday from 9 a.m. to 4 p.m. Beginning early April, the restaurant will be open from 8 a.m. to 10 p.m. The restaurant can be reached at (928) 635-0266. Much of the restaurant's success, Moore said, is due to his quality staff.

"I'd put my employees up against anybody's," Moore said.