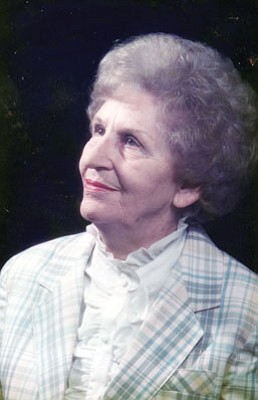 She was born Dec. 9, 1918, in Iona, S.D. Her family moved to Arizona when Cecil was 13-months-old. She lived on a farm in Tempe, Ariz. in her youth and graduated from Tempe State Teachers College, now known as ASU. Cecil was working as a secretary at Williams Air Force Base when she met Frank Evarts Wells Jr., and they were married in 1943. They moved to San Diego, Calif., where Evarts served in the Navy during World War II, and where her sons Kenneth and Brent were born.

Cecil, Evarts and their sons returned to Williams and joined Evarts' parents in the operation of the family's weekly paper, The Williams News. After settling in Williams, sons Dennis and Doug were born. She delighted in her family and the family business where she worked as it transferred from her father-in-law to husband Evarts, and then to her youngest son Doug. Cecil worked enthusiastically at The Williams News until she retired in 1985.

Cecil and Ruth Cureton established the first kindergarten in Williams and she was an active member of St. John's Episcopal Church, the Williams 4-H programs and the Williams Republican Women. Cecil loved to cook, paint and work in her yard. She eagerly anticipated holiday family gatherings.

Cecil has resided at Loyalton Elderly Care Center in Flagstaff the past four years.

The Wells family requests that those wishing to make a remembrance on behalf of Cecil Wells, send donations to Northland Hospice, P.O. Box 997, Flagstaff, AZ 86002.

Condolences may be sent to the family at www.Lozanos-FlagstaffMortuary.com. Arrangements are by Lozano's Flagstaff Mortuary.